The day after the high reached 97°, today's high soared to 99° - both records for the respective dates.  (And in 1983 the same two dates had the same high temperatures.)  This tied Aug. 7 for the year's hottest reading.

Less than two weeks after Hurricane Carol struck eastern Long Island (Aug. 30-31), Hurricane Edna made itself known, dumping 3.30" of rain, with most of it falling in the twelve hours between midnight and noon.

Today was the hottest day of the year.  After the day started with an uncomfortable low of 80°, the afternoon high soared to a scorching 99° (the day's low ended up being 78°, occurring shortly before midnight).  This was the highest temperature recorded in September since 1953, when the mercury reached 102° on Sept. 2.  The past nine days were well above average as well (+11 degrees), and included five days in the 90s.  (For some reason I chose this as the day to ride my bike over the Brooklyn Bridge for the first time.)

After a cold front passed through yesterday evening (producing thunderstorms in the afternoon), today dawned with a bright blue sky.  It provided a surreal backdrop when terrorists crashed two hijacked planes into the twin towers of the World Trade Center.  Winds out of the west/northwest kept much of the smoke billowing from the collapsed towers from blowing north over Manhattan.  The day's high/low was 81°/63°, a few degrees above average. 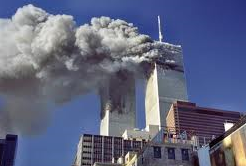 A coastal storm somewhat resembling a tropical storm buffeted the area with winds that gusted between 30-45 mph and rainfall, which fell throughout the day, that amounted to 0.84".

It was sunny, hot and humid, with a high of 96° (19 degrees above average).  This was the hottest reading on this date in 30 years, and the latest date for a reading in the 90s since 2005.  The oppressive morning low of 77° made this the 50th day of the year with a low of 70° or warmer, just the eighth year to achieve this since records began in 1869.  (Six more years have joined them since then, with 2022 being the most recent). 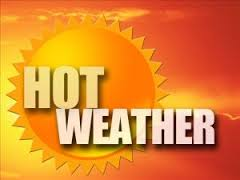 I think I may have mentioned this before, but 9/11/83 was a touchstone day for my wife and I. She was 6 months pregnant with our first child and we were driving home from Vermont that day. It was equally hot there, so much for a September getaway from the heat. We were stuck in endless traffic on The Bruckner Expressway in the Bronx and then on the BQE heading to our apartment in Brooklyn. All the while with the air conditioning in our car not working. In fact we were just reminiscing about that day once again when Lee Goldberg mentioned the record high on the 5 O'clock News today.

Who knows, maybe we were passing under the Brooklyn Bridge on the BQE just when you were bicycling over us. Small World.