A dissipating hurricane stalled off the Delmarva Peninsula and brought bands of rain over the course of the past four days, amounting to 4.46", with much of it (3.34") falling yesterday and today.  Except for one hour this afternoon, the temperature was stuck in the 60s.  These four days were the start of streak of nine days in a row (and ten out of eleven) with some rain; total rainfall during this period was around six inches.  (Last September, from the 8th thru the 21st, rain fell on eleven of the fourteen days, with nearly seven inches measured in Central Park.)

Although it was just 0.01", today's rain broke a three-week stretch with no measurable rain.  (And nearly four inches  would fall in the next two days.)

It was a very rainy Monday as the biggest rainstorm of the year (and in three years) dumped 3.07" of rain in just ten hours, from daybreak to late afternoon.

A rapidly intensifying hurricane north of the Bahamas spread heavy rain into the region during late morning and later in the evening.  In total 3.94" of rain poured down, with 2.85" of it falling between 7-11 PM.  This was in addition to 1.64" of rain that fell in the PM hours yesterday from early bands of rain.  The hurricane would move into Carolinas and then the New York region tomorrow afternoon and evening, bringing even more wind and rain.

Today's high of 94° was the hottest temperature so late in the year since 1941 when the high on 10/5 was also 94°.  Today, the last day of a three-day heat wave, was also the last 90-degree reading of the year (in total there were twenty-four days with highs of 90+ this year, well above average).

The first New York City Marathon was held today, a day with wall-to-wall sunshine.  Participants were greeted with a chillier than average morning (58°), which was great for running, and the dew point was in the comfortable 50s.  By afternoon the temperature was slightly warmer than average (80°).

It was a rainy Sunday, which happened to be the wedding day of friends from the City whose reception was held in Westchester County.  Although guests were protected by a sturdy tent, rain trickled in at the edges.  By the time the rain ended in the early afternoon, 1.89" was measured (including 0.80" that fell last night).  Today's rain was the first on this date since 1974.

Today's high was 92°, fifteen degrees above average, and the last day of the year with a reading in the 90s.  In total the year had twenty-three such days, five more than average (and quite a jump from last year's two).

This was the third day in a row with a morning low of 59°.

Overnight showers made this the sixth day in a row with measurable precipitation.  This was the fifth streak of six days or more this year - the greatest number of any year on record. 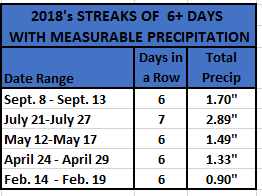 2018's streaks of six or more days with measurable precipitation are noteworthy because in the preceding ten years (2008-2017), the combined total number of these lengthy such streaks was six, which was roughly what 2018 had in just one year and four of those ten years had no such streaks this long.

Today's NY Times had an article about the first Marathon. The Marathon started at 11 AM and the winner finished in 2 hours 31 minutes, which would mean he finished at around 1:30 PM. The article described the weather as "hot and humid". I wonder how accurate that is, considering it was only 58 degrees in the morning. The high of 80 probably wasn't hit until later in the day.

Hi Ken, you're right, the Times completely misrepresented the conditions. The dew point was in the low to mid-50s during the afternoon. And 80 is hardly "hot". I've also come across misrepresentation in some stories about the Great Blizzard of 1888, in which the weather prior to the blizzard is described as being mild, when that was far from the case as temperatures were in the low-to-mid 40s. In fact, it was a very cold winter.