After three weeks in which just 0.01" of rain fell, 3.84" poured down from a hurricane that crossed the eastern end of Long Island (it tore 19 barges from their moorings in New York Harbor).  The rainfall was split pretty evenly between this evening and tomorrow morning.

A minimal hurricane off the Outer Banks of North Carolina, pushed rain squalls into the area after 10 PM on the 13th that continued through the wee hours of this morning.  The 0.75" that fell (0.56" of it today) was half the rainfall of a dry September (at the time, the tenth driest September; now ranked 21st).

The hurricane known as "The Great Atlantic Hurricane" raced up the Mid-Atlantic coastline, then veered to the east of NYC, dumping 3.82" of rain between 5 PM and midnight, and lashing the City with gale force winds that gusted between 40 and 50 mph (and 70-80 mph at LaGuardia Airport).  Today's rainfall came on top of 3.94" that fell yesterday and 1.64" the day before for a three-day total of 9.40".  The New York metro area was the bulls-eye for the heaviest rainfall. 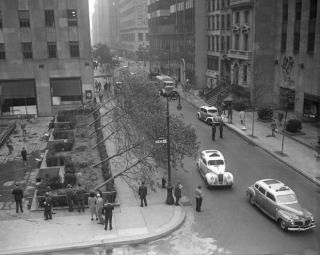 On the one-year anniversary of the "Great Atlantic Hurricane", 3.10" of rain poured down, largely during two thunderstorms between 6:00 and 10:00 PM.  The first storm was the most intense, with nearly two inches of rain falling in just an hour (between 6-7:00).

Today's high/low was 87°/72°, the 22nd day in a row with above average temperatures.  With an average high/low of 89°/71° during these days, the mean temperature was nine degrees above average.  Nine days had highs in the 90s, fourteen had highs of 88° or hotter; seventeen days had lows in the 70s.

In the past four days 6.70" of rain fell, with the bulk of today's pouring down today between 5-10 AM and 3-5 PM.  The 3.76" that fell was from tropical storm Heidi, and came less then three weeks after tropical storm Doria flooded the area with nearly six inches of rain.  Today's amount was 0.06" shy of the record for the date (set in 1944 when The Great Atlantic Hurricane struck).

The day's low of 46° was the chilliest reading of the month, 16 degrees below average, tying the record for the date.

Today was the last day with a high in the 90s/100s this year (the high reached 90°).  In total, the year had 29 such days, well above the average of eighteen.  At the time this was the ninth highest number of hot days on record (now tied for twelfth).

Three days after the 9-11 attacks, 1.90" of rain fell during the morning, hampering rescue and recovery operations down at Ground Zero.  (Later that day President Bush visited the site.)

Today was one of four days this month in which the high reached 80°, the warmest reading of the month - and the coolest maximum temperature for any September in more than 50 years.  Despite this, the month's overall temperature was slightly above average (+0.5°).

It was a delightful day, with clear skies and very pleasant temperatures that were a touch below average.  The morning low of 59° was the first in the 50s since late June.  With a high/low of 77°/59° today snapped a 16-day streak of above average mean temperatures.  During these sixteen days temperatures were close to eight degrees above average.