A category 1 hurricane made landfall on the Jersey shore in the morning and brought a brief period of heavy rain to New York between 11 AM-2 PM, with 1.63" measured.

One week after the last 90-degree day of the year, today had the last reading in the 80s, about two weeks earlier than usual.

Today's steamy high of 91°/low of 72° was 13 degrees above what's typical for mid-September.

Tropical storm Floyd flooded the area with 5.02" of rain, forcing many businesses to close early and causing service on some subway lines to be suspended because of track flooding.  Today's rainfall, a record for the date, was comparable to what fell for the entire summer (4.97").  More than half of it fell between 9 AM and 2 PM, but an additional 0.76" fell from a final band of heavy rain that moved through between 8-9 PM.

Rainfall in Newark and Philadelphia exceeded seven inches.  Floyd produced historic flooding in North Carolina, Virginia, Delaware, eastern Pennsylvania and New Jersey and, at the time, was one of the ten most destructive natural disasters in US history. 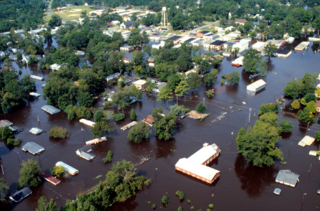 A violent and fast-moving storm ripped through the City during the evening rush hour.  While Manhattan was largely spared (0.46" of rain fell), the Brooklyn neighborhood of Park Slope and the Queens neighborhood of Flushing were struck by tornadoes.  I was meeting a friend for dinner and made it to the subway station in my neighborhood just as the storm was approaching.  By the time I arrived in Midtown fifteen minutes later, the worst of it was over.  Not until we had finished dinner and walked to Penn Station did we learn of the severity of the storm, as all service on the Long Island Railroad had been shut down for the night. 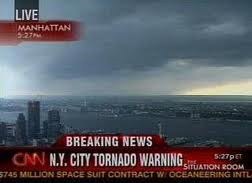