Today, with a high of 82°, was the last day to report a high in the 80s (or warmer) this year - the earliest date for this occurrence (a mark that still stands).  Typically, the last 80+ reading is during the last week of September.

This, the day after Labor Day, was the seventh, and last, day of a stretch of hot weather, with the last four days in the 90s (today's high was 92°).  The average high during this week was 90°, eleven degrees above average.  This unseasonable warmth quickly dissipated after a cold front moved through late in the afternoon, dropping the temperature to 60° by midnight.

Today's high of 96° was the hottest temperature of the year, and the year's last reading in the 90s.  (The preceding fifteen 90-degree days this summer were 90°, 91° or 92°.)  The day, which happened to be the Friday leading into Labor Day weekend, was also uncomfortably humid, with a heat index of 108° reached in the early afternoon.

Today's high of 102° was the hottest reading of the year, and the fourth time the mercury reached triple digits this year - a first (later duplicated in 1966).  This was also just the second time a high in the triple digits occurred in September (the first time was on Sept. 7, 1881). 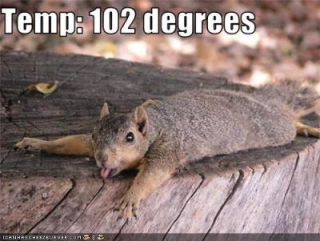 Today was the 35th, and last, day this year with a high of 90° or hotter, nearly double the average number.  These hot days fell between June 4 and today.  Additionally, there were a dozen days with highs of 88° or 89°.  This torrid summer passed 1949's to become the hottest on record, a distinction it would hold until 2010.

Similar to Sept. 2, 1932, today was the Friday leading into Labor Day weekend, and it was a scorcher, with a high/low of 94°/75°, thirteen degrees above average.

The hot summer of 1980 continued as today's high/low was 96°/75°, fourteen degrees above average. 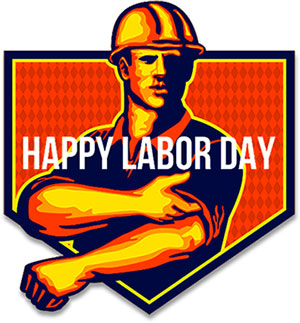 Rain fell throughout the morning of Labor Day, finally ending by 3 PM.  In total 1.63" fell, just four years after the second rainiest Labor Day (when 2.03" fell from two severe thunderstorms).

The Saturday of Labor Day weekend started off cool and wet as tropical storm Ernesto moved through, dropping 1.24" of rain; the day's high was just 66°, thirteen degrees below average.  Sunday and Monday, however, would be very nice, but a bit cooler than average (mid-70s).

Today was the fifth day in a row of 90-degree temperatures, and the 36th such day this year - thirty of them occurring since July 1.  The morning low was a steamy 78° (fourteen degrees above average), tying Sept. 6, 1985 and Sept 11, 1983 for the warmest low temperature on record in September in the past 100 years.

For the first time in ten years rain fell on Labor Day.  It occurred for a few hours during the middle of the afternoon, but only 0.05" was measured.  Afterwards, skies cleared somewhat but the muggy conditions of the weekend prevailed. 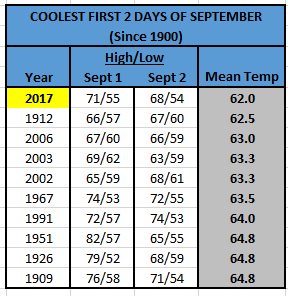 Although it was a modest amount, the 0.30" of rain that was measured from showers between 10:45 AM and 3 PM was the most to fall on Labor Day since 2003 (more than an inch of rain fell at Newark Airport).  Conditions rebounded somewhat once the showers moved out, but dew points in the low 70s made it a bit uncomfortable.  However, the temperature got no higher than 74°, which was the coolest high on Labor Day in ten years (when it was also 74°).

I remember the Summer of 1966 well. I had my first full time Summer Job, as a seasonal assistant Mail carrier at the Main Post Office on 8th Avenue. I was out there every day delivering mail, carrying a heavy mail sack on the broiling streets for several miles a day. Since I was just a temp, I got the worst routes too, mostly non-air conditioned tenement buildings on 8th & 9th Avenue. As a weather buff even then, I was aware of the historic nature of that Summer. But it was great pay for a College Student in 1966....$2.47 an hour.

Thanks for your anecdote! Did they let mailmen wear shorts back then? I was a little kid back in '66 living in Pittsburgh but I remember this summer because it got so hot at the end of June into early July that we ate dinner down in the basement a few times to keep cool (no AC back then).