The low was 64° for the third day in a row and would be the mildest low temperature of the month, the "coolest" reading on record for warmest low temperature in September (later tied in 1935).  This broke the previous record set in 1871 and 1883.

Heavy rain began falling just as the AM rush hour ended, dumping 1.60" of rain between 9 AM-noon.  Lighter rain fell for the rest of the day, and then more heavy rain moved in at around midnight and continued overnight.  In total, 3.32" of rain fell today, a record for the date (and an additional 2.96" would fall on 9/4).

On this Saturday of Labor Day weekend, today's high of 90° was the last reading in the 90s this year.  In total, the year had twenty-two days in the 90s, the most since 1966, when there were thirty-five (the average number is eighteen).

The Labor Day holiday ended with a bang as thunderstorms dumped 0.97" of rain in the two-hour period between 10 PM and midnight.

With a high of 95°/low 76°, today marked the last day of a ten-day hot spell in which six days had readings in the nineties.  During this week-and-a-half period the mean temperature was eight degrees hotter than average.

Hurricane Earl brought only overcast skies and muggy conditions to the New York area, but it lashed the eastern end of Long Island.  Then, as a downgraded tropical storm, it made a direct hit on Cape Cod.

No summer holiday trifecta this year.  After a sunny and hot Memorial Day and 4th of July (with highs of 89° and 92°, respectively), today (Labor Day) was a let-down, with gray skies (but no measurable rain fell).  However, the high was a seasonable 79°. 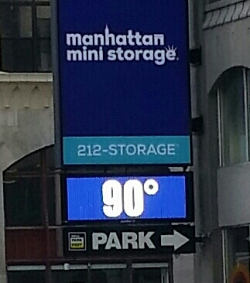 Sept 3, 1974 was one heck of a weather day in Larchmont NY. I was a young kid fascinated about the weather and on that day I witnessed 6 separate thunderstorms hit Larchmont from mid afternoon ending in the evening. There was some sun for a few minutes between each thunderstorm then the next downpour came with vicious lightning! I was alone at home and scared! A lightning bolt struck the Larchmont Post Lodge House and it burned to the ground because flood waters inundated Flint Park so the fire trucks could not get to the fire. Unofficially I measured 6 inches of rain in that short period which was the most rain at my house from one event that I can remember. I went on to become a meteorologist and received my degree from the University of Oklahoma, There were some others but that was one of my top childhood weather events. Jon Slater

Jon, thanks for your recollection. When I moved to New York from Pittsburgh in the late 70s I was surprised by the intensity of the storms since Pittsburgh was too inland to feel the effects of nor'easters. On the night of my first visit to NYC back in August 1976 my brother & I encountered torrential rain in northern NJ as we approached the City (we drove there). Not until last year did I discover what caused this rain - hurricane Belle, which made landfall on Long Island that night - and we had no clue! Like you, I was fascinated by bad weather as a kid and declared meteorology as my major at Penn State, but, alas, in my sophomore year I switched majors when I balked at all of the Physics courses that were required. But one of my roommates, George Lessens, is now the chief meteorologist for one of the local stations in his hometown of Grand Rapids.

Interesting about the Meteorology classes. I too was fascinated my weather as a kid. My original plan was to switch from Brooklyn College after Freshman Year over to CCNY which at the time (late 60's) was the only local college that had a Meteorology Major. It was calculus that did me in. I barely got a D in Calculus 101 (only D I ever got) and, faced with 3 more semesters of Calculus, the game plan changed. Meteorology became an avocation, not a potential vocation. Funny how life goes.

2020 - the first three days of the month all had measurable rain. this was the first time this happened in September since 2003, and just the eleventh September overall with this distinction. all eleven years have occurred since 1910. regarding this year’s rain, 0.23” fell on 9/1, 0.14” fell yesterday and 0.71” fell today.

Funny about meteorology, I too was interested enough to consider as a college major but it was also the Physics courses. My son is even more into the weather than I and is a meteorology major, but it's likely he's going to change as he too is struggling with the Physics (and Calculus) courses.