The remnants of what was the Great Labor Day hurricane that obliterated the Florida Keys (killing nearly 500) brought heavy rain this morning, with 1.60” measured between 2-10 AM (most of it falling between 4-8 AM).  The previous three days also had significant rainfall (2.44") but it wasn't associated with the hurricane.  All four days from 9/3 to 9/6 had highs only in the low 70s.

It was a chilly and showery day (0.32" fell), with a high/low of only 56°/49°.  The day's high temperature was 22 degrees below average and more typical for the first week of November.  The low tied 1924 for the second earliest low in the 40s (earliest is 9/4/1883).  This was one of nine days in September that were ten degrees or more below average, a month that would be the chilliest September of the 20th century.

The remnants of Hurricane David moved through between 4 AM and daybreak with 50-mph winds and 1.22" of rain.  As a hurricane, David was one of the most powerful on record, the only category 5 storm to strike the Dominican Republic, where it killed thousands.  By the time it made US landfall in Georgia it was considerably weaker.

It was a day with Mother Nature's broiler on as the high/low was a sizzling 94°/77°, fifteen degrees above average.

Today was the 15th day in a row with below-average temperatures.  During these days, temperatures were five degrees below normal.

Today's high of 90° was the last 90-degree temperature of the year.  In total, there were only eight days in the 90s this summer, well below average (18 days).

Tropical storm Hanna dumped 3.54" of rain, mostly between 3-9 PM.  Rain was heaviest between 5-6 PM when 0.97" poured down.  As a hurricane, Hanna devastated Haiti and killed more than 500.  It made landfall in the US near Myrtle Beach, SC.  The rainfall Hanna dumped on New York was the most in a 24-hour period all year and the most in sixteen months.  It was also a record rainfall for the date (and the first rain on this date in 12 years). 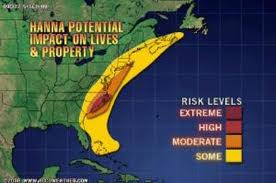 Beginning shortly after daybreak, 3.22" of rain drenched the City, just 0.04" shy of the record for the date, set just three years ago; much of the rain fell between noon and 8 PM.  Rain fell for 48 hours and was produced by tropical storm Lee, and was further enhanced by a cold front.  In total 5.33" was measured.

Today was the last day of a week-long warm spell in which every day had a high of 86° or warmer.  The high/low during this stretch, the longest of the summer, was 89°/72°, nine degrees above average.  Three of the seven days had highs in the 90s, including today's 91°.

Today, with a high of 93° (and a heat index that peaked at 104° in the early afternoon) was the end of an eleven-day stretch of unseasonably warm weather that had an average high/low of 88°/75°.  Relief arrived in the evening when a thunderstorm between 6:00 and 7:00 produced 0.36" of rain.  This hot stretch of weather had two four-day periods of hot weather at the beginning and end, with each having three days in the 90s and three days with lows of 75°+.  This was the last reading in the 90s of the year, the eighth year in which it happened on 9/6 - the most of any date.

The northernmost bands of showers from hurricane Dorian moved through during the afternoon and early evening, with most of the minimal rainfall pouring down between 3-4 PM (when 0.27" was measured).  With the storm situated to the south-southeast of the metro area, winds were from the east-northeast (peak gust at Central Park was 29 mph), making it unseasonably cool.  Before the rain moved in during lunchtime the mercury peaked at 67° then dropped to 58° by evening, the first time since mid-June that a high and low were in the 60s/50s.

A steady light rain fell mostly between dawn and dusk and amounted to 0.78".  Although this amount was the most to fall in one day in about six weeks, it was significantly less than the 2.00" to 2.50" that had been forecast a few days ago.  However, northern New Jersey, the lower Hudson Valley and western Connecticut saw amounts between 2.50" and 5.00".