Today, Labor Day, was the fourth day in a row with a low of 60°, which was a few degrees below average.  The highs, however, were different each day.

Although it was a significant cool down from the eight-day heat wave that lasted through 9/4, today's high/low of 82°/65° made this the fourteenth day in a row with a warmer than average mean temperature.  During these two weeks temperatures averaged ten degrees above average.

Just over an inch of rain fell this morning, making this the tenth day of the past twelve to have some rain.  Since Aug. 27, 7.10" of rain was measured in Central Park.  The rain that fell today was the first to fall on this date since 1958.

This was the ninth day in a row with a low in the chilly 50s.  During this streak lows averaged 55°, nine degrees below average.

Over the past two weeks (since Aug. 25) temperatures averaged eight degrees above average (high/low of  87°/73°).  Every day but one had a high of 85° or warmer, and today was the 12th consecutive day in which the low temperature was in the 70s.

Today was the fifteenth day in a row with a high in the 80s, the longest such streak of the year.  This was one day longer than a streak in July. 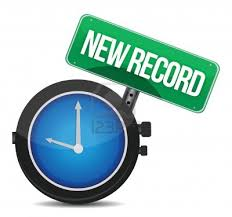 this was the final day of the two lengthiest streaks with lows of 64° or warmer. in 1980, the streak lasted for sixty-two days and began on July 8. in 2018, the streak was one day shorter and began one day later.