Today's high/low of 77°/72° was the tenth time this summer temperatures were stuck in the 70s for the entire day - the most of any year (a record that still stands).

After receiving just 0.08" of rain in the first two-and-a-half weeks of the month, a weakening hurricane to the southeast dumped nearly four inches, with most of it falling between 2 PM and midnight.  It was also a chilly day, with temperatures falling into the upper 50s during the afternoon.  This was the City's biggest rainstorm since Sept. 7-8, 1934, when a category 1 hurricane made landfall on Long Island and dumped 5.48" of rain in Central Park.

2.18" of rain fell during the morning, most of it between 9-11 AM, as the remnants of Hurricane Ivan moved through.  Ivan's rainfall was much heavier in Pennsylvania and upstate New York. 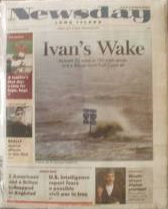 The remnants of Hurricane Florence, which brought disastrous flooding to southeastern North Carolina a few days earlier, synced-up with a cold front and brought heavy rain during the afternoon (12:30-4:30), producing 1.16".  When the rain began, the dew point was at a sticky 74°.  This rain came eight days after the remnants from Hurricane Gordon brought 1.38" of rain (but it fell over the course of nearly 24 hours).