Today was the last day of a two-week period (including a six days in a row, between Sept. 8-13) in which measurable rain fell on eleven of the days, amounting to nearly seven inches.  Three days (today was one of them) had more than an inch, another three had between 0.50"-0.99".

New York City was spared the full fury of the history-making hurricane known as the Long Island Express (also The Great New England Hurricane) as it made landfall mid-afternoon 65 miles to the east.  Still, the City was largely unprepared and had to contend with gale force winds that gusted to 60-70 mph, and four inches of rain, half of which fell between 2-5 PM.  Besides the wind and rain it was also chilly, with the temperature dropping slowly, from low-60s to low-50s.  Today's deluge followed two days of steady rain that amounted to 3.45". 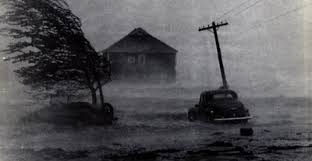 Less than a week after a tropical storm brushed the City, bands of rain from Hurricane Esther moved in yesterday evening, and continued through early afternoon today.  1.28” of rain fell, with 1.05" measured today; rain fell hardest between 2-4 AM, and 10 AM-noon.  (Before it made landfall in North Carolina a few days earlier, Esther was briefly a category 5 storm.)  Tropical storm force winds lashed the City around daybreak.  The rain produced by the storm accounted for 75% of the month’s rain (1.70”).

The rainfall record for this date, set in 1938, was easily eclipsed when a powerful nor'easter dumped 5.54", most of it in the 12 hours between noon and midnight.  At the time this was the third greatest daily rainfall on record (it's now ranked eighth).  What made this rainfall even more notable was the fact that it came in the sixth year of a drought.  The amount of rain that fell today was greater than any month's total since November 1963.

This morning's pre-dawn rainfall of 0.50" brought the month's total rainfall to more than seven inches, the third month in a row rainfall exceeded seven inches - the only time this has happened (later joined by July-September 2021).

Of the 1.88" of rain that fell today, 0.54" poured down in the hour between 11 PM-midnight (it actually fell between midnight and 1AM on the 22nd, but the National Weather Service doesn't recognize Daylight Saving Time, using Standard Time year-round).

Today's 0.06" of rain in the early evening was the same amount that fell yesterday and, like yesterday, it was the first time it rained on this date in 10 years.

Interesting about the low of 49 degrees, I didn't realize it had been that long. (It's not nearly as unusual here in western Union County NJ). Tonight's low is expected to be around 50 degrees as well. How rare would that be to have 4 days in a row with a low of 50 or lower in September?

I think the NWS and/or mother nature wanted the season’s first reading in the 40s to happen exactly four months after the previous day with a reading in the 40s (which was on May 21 when the low was 46°). I think this is why the NWS and/or mother nature made sure the temperature went no lower than 50° on either of the past two days. also, today’s low of 49° was the first in the forties on this date since 1991 when the low was 46°.

Also, to Ken K., the last back to back 40s in 2000 was actually 4 days in a row of that at the end of the month. About an hour north in Danbury, CT it was an incredible low of 29 on Sept. 29, their earliest in the season 20s and subfreezing temperature.