This morning's (and Sept. 19th's) low of 56° was the coolest reading of the month.  (The coolest reading in September is typically in the upper 40s.)  August had a cooler reading than September (55°).  Not surprisingly, this was, at the time, the third warmest September on record (now ranked eighth).

It was a day with very chilly conditions, with a high/low of only 53°/43°.  Today's high, 20 degrees below average, was more typical of the second week of November.  Unseasonably chilly days like this in autumn are often caused by nor'easters, but this particular day was dry under a mix of sun and clouds.

This morning's low of 43° (14 degrees below average) was the earliest date for a temperature this chilly since 1963, when a low of 40° was posted on this date - the record for the date.

For the third day in a row the high temperature reached 70°.

Today's high was 71°, the first time this month the temperature failed to reach 80° or higher - a record streak for September.  Up until today, the month had been seven degrees warmer than average.

Today's morning low of 67° was the mildest low temperature of the month (it also occurred on Sept. 9 and 19).  This was the coolest "maximum" low temperature for any September since 1967 (when it was also 67°).

Under clear skies, the morning low fell to 47°, eleven degrees below average and the chilliest reading in September since 2000, when a low of 43° occurred on Sept 29.

The high reached 71° for the third day in a row, close to the seasonal average. 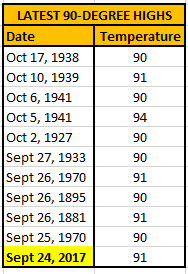 between 8/1 and today (a span of 53 days), no 90° days were reported. when was the last time more days passed between the second to last and last 90° day of the year?

The last time there was a longer hiatus between the penultimate and the last 90-degree+ reading was in 2004, when the next-to-last day in the 90s was June 9 and the last was on August 28, for a gap of 79 days. Those were also that year's only 90-degree days. For years with ten or more 90-degree+ days, 2017 comes in second behind 1938 which counted 57 days between the penultimate and last 90-degree reading.

2017 was the first time since 1986, and the fifteenth year overall, not to experience any 90° days from August second to September 23.

and among those fifteen years, 2017 was the only one to experience a 90° day after September 23.

The weather on that date was rain-free and cooler than average, with a high/low of 66°/55°.

Addendums to the above:

September 1921 also has the highest "lowest temperature of the month" for September with the 56 on this date (this has been tied several times, most recently in 2019 and 2015)

(By the way, I made a mistake in my other comment, the one heating degree day in September, 2015 occurred on the 27th, not the 30th)