A Look Back at New York Weather History: October 2

The remnants of the season's second hurricane moved through eastern Pennsylvania, producing 2.55" of rain.  2.16" of it fell today, with most of it falling between 5 AM-3 PM (the rest of the rain fell yesterday in the PM hours).  This amount was a record for the date (which still stands).

1.10" of rain fell during the morning, making this the eighth year of the past ten to have measurable rain  on this date.

Today was the 100th day this year with a high temperature of 80°+, just the fifth time this threshold was reached (it would also occur in 2015, which set the record for most such days, with 114).  A typical year has 85 such days.

Although it was just 0.06", the showers that moved through after 11 PM produced the first rain on this date in 13 years.

The record warmth of September was a distant memory as the area was lashed by wind-driven rain (1.09"), and temperatures were mostly in the low-to-mid-fifties.  In the previous eleven weeks there had been just a handful of days that had cooler than average mean temperatures, and none more than two degrees cooler than average, but today's high/low of 57°/48° was nine degrees below average.

For the first time since 1941 the temperature soared into the 90s in October.  Today's high of 93° broke the record set in 1927 (which was October's first 90-degree reading).  This was a 12-degree jump from yesterday's high, which was already 12 degrees warmer than average, and the first 90-degree reading in six weeks (8/22), making it the fifteenth this year (below the average of 18).  However, this sultry air was ushered out during the evening, and by midnight the temperature had fallen 30 degrees. 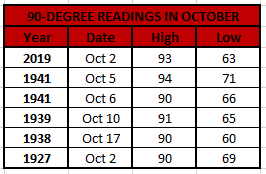