Today's high of 76° was the warmest reading since 10/1 and occurred less than a week after two days had morning lows of 32°.

Today's weather was an absolute treat as the temperature soared to a record 81°.  This followed yesterday's record high of 82°.

Today's chilly high of 47° was the first day this month with a high below 60°.  Ironically, 10/1 had the month's first, and only, low in the 30s (today's low was 44°).  In between, the days were mild enough to make this the mildest October on record.

Partly cloudy and chilly, with a high/low of 48°/35°, eleven degrees below average.  When the kiddies were out at 7:00 PM, ringing doorbells and collecting their treats, the temperature was a brisk 42°.  This was an appropriate end to the most below average October (-4.8 degrees) since 1925.

Sunny and cold, with a high of 50°/31°, eleven degrees below average.  When trick-or-treaters were out and about the temperature was a nippy 43°.  The morning low was the first temperature of 32° or colder this fall, a few weeks earlier than usual.

Temperatures during the past two weeks were 10 degrees above average.  Half of the days had highs in the 70s, including today which topped out at 72° (average high is around 60°) .

An intense nor'easter (made famous by Sebastian Junger's book The Perfect Storm) brought gusty winds of 30-40 mph, but stayed far enough offshore that NYC received just a a trace of rain. 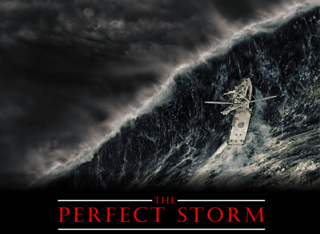 Rain that began yesterday morning continued thru 11:00 tonight.  During this day-and-a-half of inclement weather, 1.68" of rain fell, 0.71" of which fell today.  For the entire event, the rain came down hardest during the Greenwich Village Halloween Parade as 0.25" fell between 8-9 PM.

It was a very mild day (high of 71°), but light rain began falling just as the Greenwich Village Halloween parade was getting underway.  Although just 0.17" fell over five hours, this was the first rain to fall on Halloween night in 14 years.

In 2011 many of New York's suburbs postponed or cancelled trick-or-treating because of power outages caused by an unprecedented snowstorm two days earlier.  This year, most Halloween festivities were once again cancelled, this time due to power outages caused by superstorm Sandy which struck two days earlier.  And for the first time in its 39-year history Greenwich Village's Halloween parade was cancelled.  The day itself was chilly and mostly overcast, with a high of just 50°. 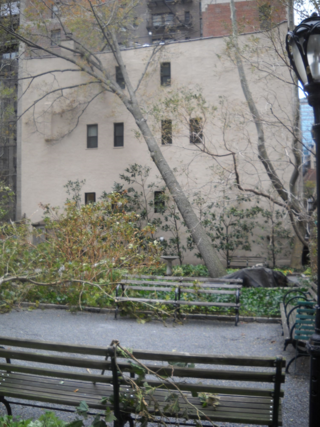 The 0.06" of rain that fell from showers during lunchtime and after 11 PM was just enough to keep this month from becoming one of the ten driest on record.  With 0.36", October 2013 ranked twelfth and was the driest month since August 1995 (when 0.18" was measured).

As the warmest October on record came to a close, today had the chilliest high temperature of the month.  But at 57° it was only two degrees chillier than average.  And it was a beautiful day under clear skies.

It was a very mild day, with the warmest readings occurring after dark.  The high of 71° didn't occur until close to midnight.  This was the mildest reading since 10/14 and the mildest reading on Halloween in ten years (another high of 71°).  Besides being so mild (the low was 60°) it was also uncomfortably humid, with the dew point in the mid-60s, and humidity in the 85-90% range.  Luckily for trick-or-treaters, showers that produced 0.54" of rain were over by noon.  (Also, a strong cold front that triggered some violent storms didn't reach the City until after midnight.)

This morning's low was a frosty 32°, the first reading of freezing or colder in October since 1988 (which also occurred on Halloween).  This was three weeks earlier than the average date of the first low of 32° or below.  And it was the coldest reading this year since March 1 (when the low was 25°).

What is the average first 32 degree temperature in NYC?

also in 2020, the low of 32° was quite a shock to the system considering that the first 29 days of the month never went below 44° (yesterday’s low was 37°). also, 2020’s high of 46° was the coldest high temperature on Halloween since 1925, when the high was 44°. lastly, for only the second time in its 47 year history, Greenwich Village's Halloween parade was canceled due to the virus.

October 2021 was the fourth month in a row with five inches or more of precipitation. when was the last time there was a streak this long of this kind?