Today was the eleventh day in a row with highs of 70° or warmer (including four in a row in the 80s).  The average high/low during this extended period of unseasonable warmth was 78°/62°, eleven degrees warmer than average.  And a week later there would be a three-day period with an average high/low of 77°/57°.  This October would end up being the second warmest on record (now ranked fourth), two years after the warmest on record (now ranked second).

Today's high, under sunny skies, was a balmy 83°, just one degree shy of the record for the date.  This reading was warmer than any in September.  The last time it was warmer than today was seven weeks ago, on Aug. 27.

This was the fourth day in a row with a chilly morning low of 43° - eight degrees chillier than average.  This came one month after four days in a row with a low of 66° (Sept. 4-7).

Temperatures over the past nine days averaged 10 degrees below average (high of 58°/low of 42°).  Four of the days had lows of 37°, three of which were records for their respective dates.

Today was the seventh day in a row in which the day's low was 66° or higher, 15 degrees above mid-October's norm. 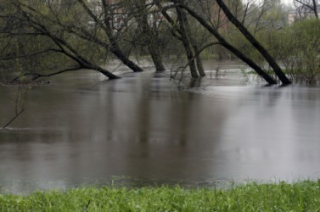 The mildest low of the month was 58°, which happened today and on three previous days (all since 10/9).  This was the last year the mildest low in October failed to reach 60° or milder (thru 2021).

This was the twelfth day in a row with a low in the 60s, a record streak for the month of October (breaking a tie with October 2018).  Interestingly, the low temperatures during this streak were all in the narrow 60°-62° range (but highs ranged between 65°-77°).  This streak's average high/low was not nearly as mild as the seven streaks behind it. 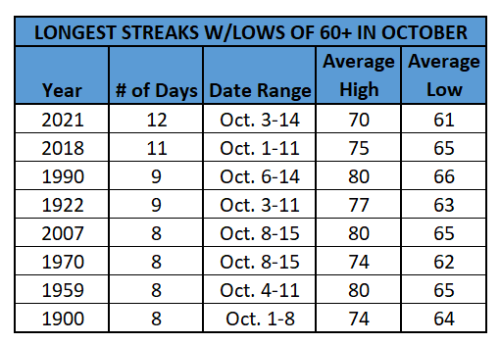