Six of the past seven days had highs in the 70s (warmest reading was 77°) at a time of year when the average high is in the low 60s.  And four of the days had lows in the 60s (warmest was 68° on the 19th, a record that still stands).  Cooler air moved in later today after a coastal storm that produced 2.33" of rain between last night and noon today exited.

This morning's low of 32° was one of the earliest freezing temperatures on record in Central Park and came a month earlier than the typical date for the first such frosty reading.  (The earliest frost on record occurred in 1876 on 10/15.) This morning's low was 31°, breaking the record set just two years earlier.  This was the third earliest date for a temperature of freezing or colder.

The afternoon high reached 58° for the third day in a row.  (However, each day had a different low.)

2.78" of wind-swept rain fell today, and 5.34" fell over the past four days.  With today's rainfall (a record for the date), Central Park's total precipitation for the year topped 60 inches, making 1989 one of the five wettest years on record - with more than two months remaining in the year.  (Average annual rainfall is about 46 inches.)  Today's winds gusted to 40 mph.

Humidity levels dropped below 20% during the first half of the afternoon, a rarity in October, which is the month least likely to experience humidity below 25%. 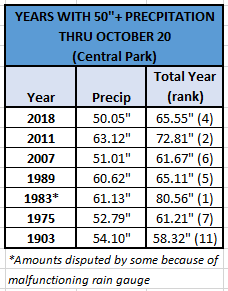