The center of circulation from a dissipating hurricane got very close to New York as it moved northeastward, dropping 1.56" of rain.

A nor'easter dumped 3.40" of rain, the biggest rain producer of the year and a record for the date (which still stands).  Rain fell throughout the day, but it came down heaviest after 5 PM, with two periods of torrential rain between 5-6 PM, when 0.72" fell, and between 11 PM-midnight, when 1.05" was measured (in reality, this rain fell from midnight-1 AM on the 27th, but since the the National Weather Service uses Standard Time all year round it was credited to 10/26 rather than 10/27).  There was a peak wind gust of 41 mph. 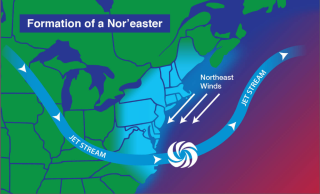 Periods of cold rain accompanied winter-like temperatures as the high/low was just 39°/34°.  This high was 21 degrees below average - and it was the earliest date on record for a high in the 30s.  In addition to rain in the morning and afternoon showers (amounting to 0.32"), a trace of snow was also reported.

Today's high of 78° tied the record set just one year ago, and came two days after a low of 33°.  Skies were clear.

Conditions for this year's NYC Marathon couldn't have been more different from last year, when temperature rose to 80° and skies were sunny.  This year, runners had to contend with temperatures in the 40s throughout the day and winds gusting between 25-40 mph.

A steady light rain during the daylight hours (amounting to 0.64") forced postponement of Sunday's Game 7 of the World Series at Shea Stadium.  This followed the incredible comeback by the Mets last night in Game 6 when a ground ball went through the legs of Red Sox 1st baseman Bill Buckner in extra innings, giving the Mets an improbable win. 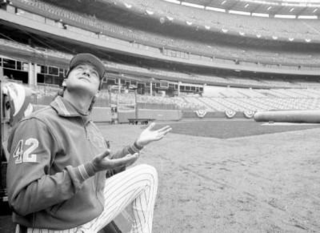 After the three previous days had morning lows of 50°, the streak was broken today - with a low of 51°.

After moving in late last night, a nor’easter dumped 3.30" of rain today, with 2.51” falling this morning, and 0.79” after dark (and it continued falling overnight).  This rain brought an end to what had been a dry October, with less than an inch of rain through yesterday.  Today’s rainfall came very close to the record for the date, 3.40” in 1943 (also produced by a nor’easter).  The storm’s total rainfall of 3.69” made it the third biggest rainstorm of the year, behind Henri's 8.19" in August, and Ida's 7.23" at the beginning of September.

Side note about this date in 1962, while Central Park had just a trace of snow, not too far away LaGuardia Airport had an incredible 1.2 inches!

Interestingly, while October 2021 may have half as much rain as July, August, and September, the sky index for October may report the cloudiest conditions (assuming that another rain system comes this weekend). In the summer months, the skies were sunny outside of the rainstorms. But in early October despite a dry stretch a low layer of clouds settled here, resulting in a narrow temperature range in the 60s (not too warm but not too cold either).