A stalled hurricane (which weakened to tropical storm status) and a low pressure system that formed along an approaching cold front, combined to create a tremendous rainstorm that produced 11.63" over 26 hours.  The deluge started late this morning (4.30" was measured) and continued thru mid-afternoon on the 9th (when an additional 7.33" fell).  Rain fell at a rate of an inch every two hours for a large portion of the storm; at its most intense, 2.54" fell from 9-11 AM on the 9th.  At the time, the rainfall on the storm's second day was New York's second greatest daily amount (behind Sept. 23, 1882's 8.28"); it's now ranked fourth.

The first eight days of the month had an average high of 81°, fourteen degrees above average.  Highs ranged between 76° and 86°, with five of the days reporting highs in the 80s.  Today's high was 86°, a record which held until 2007.

On the afternoon that the Yankees' Don Larsen pitched a perfect game in World Series Game 5 against the Brooklyn Dodgers at Yankee Stadium, skies were clear and temperatures were in the seasonable mid-to-upper 60s. 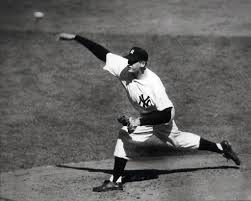 1.89" of rain fell, beginning around noon and continuing thru midnight.

Rain that began last night continued for thirty-two consecutive hours, totaling 4.49" by midnight.  This was the first in a series of huge rainmakers that dumped nearly 17 inches of rain on the City in a two-and-a-half week period.

Today's sultry high of 87° was a record for the date and the fifth day in a row with temperatures in the 80s - the longest such streak in October since 1990.

Today became the latest date for a low in the 70s, besting the previous record, set in 2005, by one day.  However, because of clouds and high humidity, the temperature never got out of the 70s (and the dew point was in the 70s from 8 AM onward).  Additionally, rain showers that fell between 8 AM and noon ended the City's 18-day streak with no measurable rain - the longest such streak in nearly two-and-a-half years.  By coincidence, the 0.22" of rain that fell today was the same amount that fell on the last day with rain before the streak began.  (Today's temperature record would last one day as the low was in the 70s on 10/9.)