Showers that moved in at around 10:15 this morning produced the first measurable rain in four weeks, the second longest dry spell on record (eight days fewer than the 36-day drought in the autumn of 1924).

Skies were mostly cloudy and temperatures in the seasonable upper 60s when the New York Giants' Bobby Thomson hit his famous "shot heard 'round the world" - a three-run home run against the Brooklyn Dodgers in the bottom of the 9th inning that gave the Giants a come-from-behind win, and the National League pennant. It was a very chilly day, with a high/low of 50°/38° (19 degrees below average).  Winds were out of the northwest and skies were a mix of sun and clouds.  The morning low tied the record.

A morning downpour greeted Pope John Paul II as he traveled down Fifth Avenue from St. Patrick's Cathedral on his way to Madison Square Garden, where he was attending a children's reception.  (I saw him pass by in his "pope mobile" as I walked to work.) 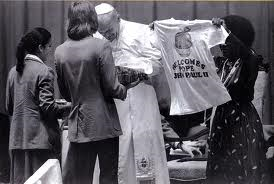 This morning's low of 43° was the first reading in the 40s this fall, the latest date for this occurrence since 1982, when it occurred on 10/10.  This reading was eleven degrees below average.

The day after the mercury soared to 93° (twenty-four degrees above average) winds shifted overnight to a northeasterly direction, and temperatures this afternoon were only in the mid-50s.  Light showers and drizzle fell throughout the day, amounting to 0.34" - the most rain to fall in one day in six weeks.

I noticed New York had a third of an inch of rain on this date in 2009. what time did the rain fall? during the mid-afternoon hours, I was riding a non-motorized scooter down a steep hill and lost control and broke my right arm (which would continue to be broken for the next month and a half or so). I don't remember any rain when this happened.

Much of the rain on that day occurred between 2-3PM. But that's in NYC so this period of rain may have missed your neighborhood.