A dissipating tropical storm dumped 4.05" of rain on Central Park (a record for the date that still stands).

Today had the third low in the 70s this month, the most ever reported in October.  This was somewhat ironic considering that the year had 18 such days in total, well below the average of 25 days (1920-1950 average).

Skies were sunny and the temperature in the low 70s as the Brooklyn Dodgers finally won the World Series after eight tries.  And they did it against the Yankees (in seven games), making their championship even sweeter. 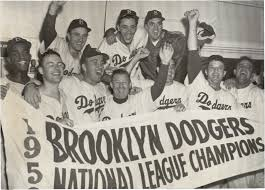 This was the fourth day in a row with a mean temperature that was 10 degrees or more below average; during these days temperatures were 14 degrees below average.  Today's low of 38° was the same as yesterday's but this morning's reading was one shy of the record.  Skies were clear.

After a very mild day (high 78°/low 64°), a cold front passed through after dark and generated a thunderstorm that drenched the City with 0.41" of rain between 11 PM-midnight.  (This downpour actually occurred between midnight-1 AM on 10/5 but the National Weather Service doesn't recognize Daylight Saving Time, using Standard Time year-round for its records.)

It was a warm and sultry day, with a high of 86° under partly cloudy skies (18 degrees above average).  This was the third 80-degree day this month, the most in October since 2007, when there were five.

When the observation of Yom Kippur started yesterday evening, skies were clear and temperatures seasonable, but today saw 1.18" of rain fall between 6 AM- 3 PM (with 0.75" falling between noon-2 PM, making this the second rainiest Day of Atonement in the years since 1970.  (This was also the first one-inch rainfall since mid-July).  However, skies cleared rapidly and by 4:00 conditions were as nice as the evening before.  The amount of rain that fell was just 0.03" less than what fell in the entire month of September.

10-4-55. One of the most memorable moments of my early childhood in Brooklyn. I remember running outside and joining about 7 or 8 other neighborhood kids banging pots and pans. And every car passing on the street was honking horns. Thanks for the weather report.