For the second year in a row the high/low on Thanksgiving Day was 43°/32°; skies were clear in both years as well.

One of the strongest nor'easters of the 20th century lashed New York on what was the Saturday after Thanksgiving.  Howling winds gusted as high as 70 mph, and 1.58" of rain fell between 6 AM and 8 PM.  Temperatures dropped steadily during the day, from 59° to 36°.  This storm produced very heavy snowfall in Pennsylvania and the Appalachians, including 27.4" in Pittsburgh (over the course of three days). 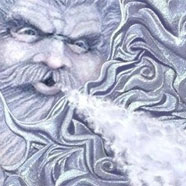 Beginning late last night and continuing through this morning, a nor'easter lashed the area.  1.06" of rain fell, making this the rainiest Thanksgiving Day since 1935.  Besides the wind and rain, it was also cold, with a high/low of 39°/33°.  Ferocious winds, with a peak gust of 63 mph in Central Park, produced wind chills that were in the low 20s.  The high winds forced parade officials to ground the famed balloons of Macy's parade - the only time this has happened.

The first measurable snow of the season, albeit a minuscule 0.1", fell between 10-11 PM.

It was a windy day, with slowly falling temperatures.  The mercury dropped to 32° after 11 PM, the first freezing temperature of the fall (about a week later than usual).

Today's morning low was a balmy 63° and the afternoon high reached a May-like 72°, resulting in a daily mean temperature that was a whopping 25 degrees above average.

Today was the sixth day in a row with a low of freezing or colder, the longest such streak in November in the years since 1940 (later equaled in November 2008).

It was a mild Thanksgiving Day, with temperatures in the 60s during the morning hours, but after peaking at 65° in the early afternoon, a cold front moved through and the mercury fell by 30 degrees by midnight.

There was just a two-degree variation between today's high (51°) and low (49°).  Although the high was average for the date, the low was ten degrees above average.

Thanks, and Happy Thanksgiving!

A couple of things about the 1971 Thanksgiving Day storm not mentioned. First off some snow briefly mixed in as a trace was recorded in Central Park. And as close as Poughkeepsie there was 2 feet of snow (Albany, NY as well).

today in 2018, the high of 55° was two times as warm as the high temperature that occurred just three days ago (on Thanksgiving Day).