This was the thirty-sixth day in a row with no measurable rainfall, the longest dry spell on record (a record that still stands).  The previous record was 27 days set 40 years earlier, in September 1884.

The morning low of 32° (ten degrees below average) came four days after a high of 69° (fourteen degrees above average).  These readings were the temperature extremes of the month.

The high temperature today and the previous three days: 56°-55°-56°-55° (today).  These were average maximum readings for this time of the month.

For the tenth day in a row the morning low was in the 30s.  However, none of the readings were at freezing or colder.  The average low temperature during these days was 37°, six degrees chillier than average.

For the 15th day in a row, no morning low was duplicated.  During this string of days low temperatures ranged between 30° (13 degrees below average) and 62° (18 above average).

Light showers after 9 PM amounted to 0.04", making this the seventh time in eight years that measurable rain fell on this date.

A fast-moving cold front produced a severe thunderstorm this afternoon between 2-2:30, with hail (a rarity in Manhattan even in the summer, let alone in November), a brief downpour, and 40-50 mph wind gusts.  This line of storms was even more severe along the Jersey shore and on Long Island, where wind gusts between 60-79 mph were clocked; four tornadoes touched down on Long Island.  Temperatures dropped from the low-60s to low-40s by evening.  The 0.33" of rain that was measured pushed the year's precipitation just over 58", moving 2021 just outside of the top-10 wettest years. 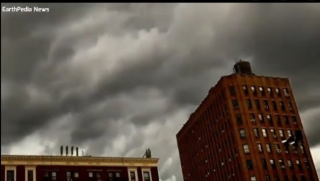 New York managed to experience three dozen consecutive days without rain, but yet, only had as many as twelve days in a row with rain, so why is there a significant difference in these two record occurrences?

Since, in a typical year, two-thirds of the days have no measurable precipitation it stands to reason that dry spells will often be lengthier than wet spells. If we lived in a tropical climate (like southern Florida), where daily afternoon thunderstorms are common, longer streaks of rainy days could be expected.