Three days after the temperature reached 65°, it dropped to 20° shortly before midnight tonight.  This was the coldest reading so early in the season since 1933, when the low was 17° on 11/16.

Following a nor'easter that dumped 2.23" of rain yesterday, today was raw and overcast with slowly falling temperatures.  Dropping from 37° to 31°, the day's mean temperature was 14 degrees colder than average.

Today's high was a record-setting 77° (broken twenty years later), the warmest day in six weeks.  It was also the 14th day in a row with no measurable precipitation.

The morning low was a balmy 61°, twenty degrees above average (and eight degrees warmer than the day's average high).  Under overcast skies the afternoon temperature rose to 69°.

Today's high of 80° (twenty-seven degrees above average) is the latest 80-degree reading on record in Central Park.  This was nearly two weeks later than the previous "latest 80" back on Nov. 2, 1950.  This followed by three years New York's earliest 80-degree reading, on March 13, 1990. 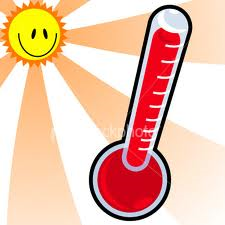 Today was the first overcast day since Oct. 29, the day of the Northeast's freak snowstorm.  Between that day and today, New York City experienced more than two weeks of fair skies.

Heavy rain that fell mostly between 7 AM and 1 PM amounted to 1.81".  This was the most precipitation to fall in one day since the record-setting blizzard on Jan. 23 (which produced 2.31" of liquid precipitation).  It was also the biggest rainstorm of the year, beating Jan. 10 by 0.01".  The last time more rain fell was on July 30, 2015, when 1.95" fell from afternoon thunderstorms. 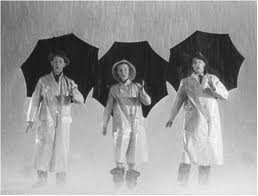 An early season snowstorm moved in during early afternoon and by evening 6.4" of heavy, wet snow had piled up, much more than had been predicted, and the earliest on record for a snowfall this deep (and just the fifth snowfall of six+ inches in November).  When the snow began falling the temperature quickly dropped from 36° to 28°, but then began rising after 7 PM, and was back at 36° by 10 PM.  Rush hour traffic of all kinds was snarled for hours and hundreds of trees lost branches, which snapped off from the weight of snow.  As the storm exited winds picked up and gusted to 35 mph (and to 45 mph at the area's three airports).  It would be nearly three months until the next snowfall of an inch or more (1.2" on Feb. 12). 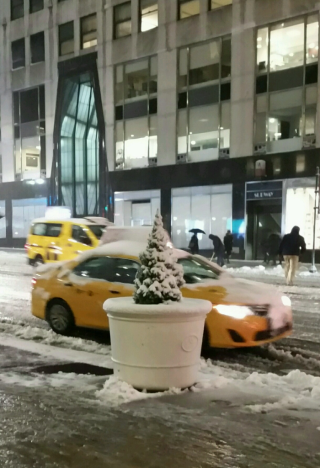 A squall line tore through the area this evening from 8:15-8:45 PM, delivering a brief downpour and high winds.  With a gust of 41 mph, Central Park got off relatively easy compared to the area's three major airports, which clocked peak gusts in the 58-62 mph range.  And although the rain was torrential in my neighborhood (Greenwich Village), Central Park reported just 0.06".  Finally, the day's mild high of 64° occurred just as the squall line was moving through.  (One year later a line of severe thunderstorms on 11/13 produced hail, and tornadoes touched down on Long Island.)

November 15 is a study in contrasts. Not only is it the latest date on record for an 80° day but it is also the latest date for the first reading in the 30s of any autumn season on record. the year was 1938 and low was 37°. Coincidentally, this came 1 month after the latest 90° day on record (on 10/17).

in 2018, how do you know what the wind gust/speed was if Central Park's anemometer was broken for several weeks at the time?

I looked at observations on Weather.com as well as WNBC and WABC.

also in 2018, through today, there were 139 days with measurable precip this year (& the # would grow to 140 by tomorrow when 0.31" would fall). this was just the twelfth time with 120+ such days in a year through this date. among these twelve years, this was the second most precip of them all (56.05"). the most precip of these twelve years happened in 1972 when 57.91" fell, but compared to this year, it "only" took 120 days for this much precip to fall during the first ten and a half months of the year.

speaking of which, are you going to publish a post on the broken anemometer like you did for 1983's broken rain gauge?

the storm in 2018 brought to mind the snow that fell on February 17 of the same year (when 4.4" fell) as the high/low on both days was 40/28. however, while 2/17 was only 1.6 degrees below normal, 11/15 was as much as fourteen degrees below normal. although the snow on both of these days fell exclusively during the PM hours, another difference was that the temperature never fell below 33° while the snow was falling on 2/17.

I still scratch my head over February 2018's snowfall. It must have either been concentrated over northern Manhattan or it melted before I woke up because I don't recall any significant snow on the ground where I live (Greenwich Village). This especially surprised me because Central Park is notorious for reporting accumulations that seem to be low relative to surrounding reporting sites.

my dad's ride home during the storm in 2018 on this date was among those that were snarled. it was a four hour drive on what is generally a 45 to 50 minute trip for him.

2018 was the tenth calendar year in the past century with 39.6" or more of snow in the first ten and a half months of a year and six of these ten years have occurred since 1990. the amount of snow during these ten years ranged from 39 inches to 62 inches.

On this date, both 2018’s surprise snowstorm and 2020’s sudden squall line were unexpected events that were more severe than they were originally forecasted. I remember 11/15/18 being one of the worst traffic days I have ever experienced as the heavy snowfall struck without warning. Many businesses were unaware of the intensity of the storm and did not close down early. The forecast in advance for 11/15/20 was actually for light showers over the afternoon and evening. The forecast suddenly worsened on the morning of the event. Even severe thunderstorms and potential tornadoes were forecast for the entire area. While the thunder and tornadoes did not occur (thankfully!), the sudden straight-line winds were the biggest threat when the squall line hit.

Also on 11/15/20, Manhattan came under a tornado warning for the second time this year, the first time being on 4/21. Tornado warnings are very rare in New York (about one per year), and extremely rare in April and November.