For the eighth day in a row the low was 32° or colder - the longest such streak in the month of November in the 20th century (and through the first 21 years of the 21st century), and tied with a similar streak in November 1880.

Although it was just 0.14", the light rain that fell this morning occurred during the fourth Macy's Thanksgiving Day Parade.  The rain put somewhat of a damper on the debut of the parade's famous helium balloons. 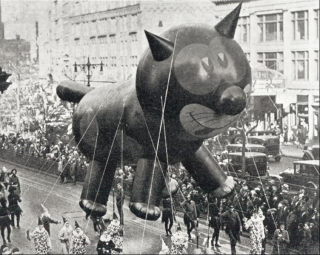 It was Thanksgiving Day, and very cold air moved in later in the afternoon, slicing the temperature in half, from 49° to 24° by midnight.  Light showers fell before and after the Macy's parade.  (To read more weather highlights of other Thanksgiving holidays double click here.)

Arctic air moved in overnight, and temperatures were below freezing all day, making this a cold day even by the standards of mid-winter.  Today's high/low of 30°/23°, eighteen degrees below average, was the coldest November day in five years.  Howling winds of 25-40 mph made it feel like it was between 10° and 20°.

A lashing rain overnight (0.70" was measured) was accompanied by a surge of very mild air.  After the sun broke through during lunchtime the temperature warmed to 69°, making this the warmest day of the month - five days after the coldest temperature was recorded (22°).  At midnight the temperature was still 68°.

The season's first freezing temperature occurred this morning shortly before 4 AM.  (Since 1980 the average date of the first freezing reading has been 11/21.)  The rest of the day remained chilly, with a high of 46°.  (Yesterday had a chillier mean temperature, with a high/low of 44°/33°).

This was the last day of a 16-day streak with below average mean temperatures, the longest streak of its kind since one of 22 days in March of this year.  However, this month's streak was a lot more below average (-8.5 degrees vs. -4.5 degrees in March).