For those with an affinity for numbers, the morning lows of the past six days exhibited the following pattern: 43-43-38-38-36-36 (today).  Today and yesterday's readings would be the chilliest of the month, making this the first November since 1985 not to report a temperature of 32° colder.  This was also the mildest reading to be the chilliest of any November (later joined by Nov. 2011).

It was sunny and brisk, a perfect day for the Yankees' victory parade in Lower Manhattan (they won their 27th World Series title, over the Phillies, a few days earlier).  The high/low of 50°/37° was six degrees chillier than average. 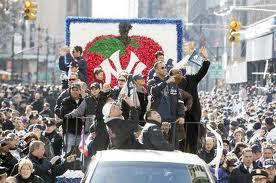 The morning low was 31°, the earliest sub-freezing low temperature since 1988 (when it occurred on Halloween).  The typical date for this first occurrence is Nov. 18.

Today's high of 74° tied the record for the date and was the warmest reading in November since 2003.  Meanwhile, the morning low of 66° broke the record for mildest low temperature for the date, and became the second mildest low ever reported in November (one degree lower than Nov. 2, 1971).  This was the fourth day in a row with highs in the 70s - the longest such streak in November since 1994.  The average high during these days was 72°, fifteen degrees above average.

Conditions were nearly perfect for the running of the NYC Marathon, with sunny skies and temperatures in the 50s for the bulk of the race (thru late afternoon).  Breezy conditions (20-25 mph gusts) was the only fly in the ointment. 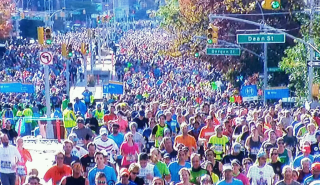 Mr fry....how goes it? Wax is good missing the weather chat...wanted to say hello! And bundle up the COLD is coming fast try next week weds....haha yes! Brother fry be well...

2018 - 1.57" of rain fell during the first six days of the month (0.68" fell today). this amount was comparable to the rain that fell in all of last November and this was the wettest first six days of November since 1992, when 2.76" fell. this was also the twenty-second year overall with this much rain to fall during November's first six days.