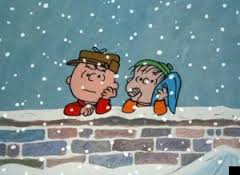 After mild temperatures in the overnight hours, and a hard rain in the morning that amounted to 1.16", the temperature plummeted from 60° to 22 °.

A snowstorm dumped 12.7" of snow between 7 AM-9 PM, with nearly ten inches on the ground by mid-afternoon.  The snow was very fluffy, produced from just 0.59" of water (and by daybreak on 12/16 the amount on the ground had packed down to nine inches on the ground).  The day's high was 28°, the first of five days in a row with highs in the 20s.

A storm that moved in yesterday, with rain in the late morning, saw a change over to snow just after midnight today as the temperature dropped from mid-30s to the low 20s.  5.2" accumulated by 12:00 noon.

0.3" of snow fell overnight, the first measurable snow of the winter.  However, it was all gone by early afternoon as the temperature rose into the upper 30s.  Today's precipitation was the first to fall on this date since 1958.

For the first time this winter the high temperature remained below freezing all day (high of 31°/low of 18°).  And the first snowfall of the winter arrived after 9 PM, accumulating 1.1" by midnight.

This was the thirteenth day in a row with a high colder than 40°.  The average high/low during this nearly two-week period was 34°/25°, ten degrees colder than average.  Today's high/low of 38°/18° followed yesterday's 24°/14° (which would be the coldest day of the winter).

Today's high temperature of 67° was a record for the date, twenty-four degrees above average.  This was one of seven days between Dec. 9 and Dec. 28 with a high of 57° or warmer (three days were 65°+).  This was also the third year in a row to have 0.01" of precipitation fall on this date.

Can anything stop this December from becoming the warmest ever -- by a wide margin?

besides 1909, 1880 is the only other December with no reading of 40° or warmer in the final sixteen days of the month.

We're likely using different years. As my post indicates, the average I use is based on the fifty years since 1970. Do you know what time frame the NWS is using?

No I don't know what time frame the NWS was using here. I imagine there's a difference in the average date for a season's first measurable snow cause they probably looked at every single year (including the last three decades of the nineteenth century), while you only looked at the 50+ years since 1970 and not any of the years that preceded 1970.

The probably used a 30-year average, like they do with most of their averages.