Today was the first day this month with a low temperature above 32°.

An afternoon/nighttime snowstorm dropped 8.3" (all but 0.3" fell today).  This would be the biggest snowfall of the winter (and since March 1941).  Besides the snow, temperatures were also quite cold, with a high/low of just 23°/20° (fifteen degrees below average).

One year after the huge 26.4" snowstorm of Dec. 26, another formidable snowstorm crippled the City with 16.0".  At the time, this was the shortest time between major snowstorms.  Since then there have been seven pairs of major snowstorms (of a foot or more) that have occurred with less than 12 months in between (the shortest hiatus being four weeks, in January and February 1978.)

For the second day in a row the high/low was the same frigid 25°/17°, the coldest days of the month.  The sub-freezing cold prevented the layer of thick ice from the ice storm of 12/16-17 from melting quickly.

3.5" of snow fell, the first measurable snowfall of the winter.  It would be the winter's largest accumulation until mid-March.  Today was also the coldest day of the month, with a high of 26° after a low of 20°. 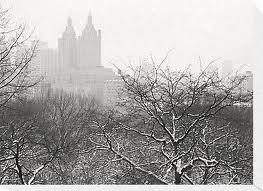 Today was the first day of the winter that had temperatures completely below freezing, with a high of 28°/low of 21°.

With a high of 30°, today was the first day of the winter with a maximum temperature of 32° or colder.

With a high/low of 27°/13°, today was the first day of the winter completely below freezing.

An Arctic front moved thru late in the afternoon, and the temperature plunged from 47° to 21° by midnight.  The season's first measurable snow fell between 9PM-3AM, but it was just 0.6".

Four inches of wet snow fell (an additional 0.5" fell overnight).  This would be the biggest snowfall of the winter until March 1-2, when 8.3" fell.

The first snowfall of the winter was a snowstorm that moved in late in the afternoon.  By the time it ended at around 4 AM on Sunday, 10.9" had piled up.  Long Island received considerably more, with parts of Suffolk County buried by more than 20". (Photo taken in the NYC suburb of Bronxville.) 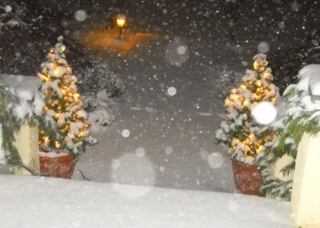 With a high/low of 25°/16° (fourteen degrees colder than average) today was the first day this winter with a high of 32° or colder.  This was close to the average date of this occurrence, but it was the latest date since the winter of 2015-16 when it didn't occur until Jan. 5.  Wind chills during the morning were in the single digits.  This would be the coldest day of the winter of 2019-20 - the first winter since 2005-06 to have its coldest day occur in December.

2020 - this was the first time Central Park had consecutive days with a high of 32° or colder since March fifth, sixth and seventh of 2019. interestingly, just like this month, those three days in March 2019 also followed 10.5” of snow that fell earlier that month.

What was coldest temperature last winter??