This was the last day of a two-week period with unseasonably cold weather.  The average high/low of 32°/21° was ten degrees below average.  Eight of the days had highs that were 32° or colder.  And there were snowfalls of seven inches and six inches.

A snowfall of 2.7" during the afternoon was produced from 0.15" of liquid, which was the most to fall during what would be the driest December on record (0.25" of precipitation).  Today's amount was the most to fall in nearly five weeks (since 11/20, when 0.37" of rain/snow fell).

Snow that began late in the afternoon yesterday continued thru 9 AM today, adding 10.3" to yesterday's 3.4", for a total accumulation of 13.7".  (By contrast, LaGuardia Airport picked up just 5.6".)  Snow fell heaviest between 1-6 AM when six inches accumulated.  The day's temperatures were well below average, with a high/low of 28°/17°.

The first one-inch snowfall of winter fell between mid-morning thru early afternoon, accumulating 1.8" (the first measurable snow of the winter fell one week earlier on 12/15).  It was also a cold day, with a high/low of 32°/23°.

Very similar to 1970, light snow fell throughout the morning and continued until mid-afternoon, accumulating 1.8".  This was the first measurable snow of the winter.  And at 32°/24°, the day's high/low was nearly identical to 1970's as well.

The first snowfall of the winter fell in the pre-dawn hours, but after 0.6" accumulated it was quickly washed away by heavy rain (about two inches).  The temperature rose steadily from 31° to 53°.

In the midst of a frigid December (second coldest on record), today's high of 18°/low of 8° was not only the coldest day of the month - but of the entire year.

After a very mild low of 58° (twenty-eight degrees above average!), the afternoon high inched up by only three degrees.

The 0.14" of cold rain that fell this evening after 8 PM was the first precipitation to fall on this date since 1983.

The temperature dropped from a record high of 63° to 22° by midnight.  This was the first subfreezing temperature of the season, the latest date for this occurrence on record, breaking the previous 1948 record by eleven days.  Between Nov. 29 and today temperatures were 11 degrees above average.

Today was the first of thirteen days in a row with high temperatures of 32° or colder - one of New York's longest cold streaks on record.  During mid-afternoon a quick burst of snow amounted to 0.8".

A high/low of 27°/13° made this the coldest day of the month.  (Two days later the temperature would jump into the upper 50s.) 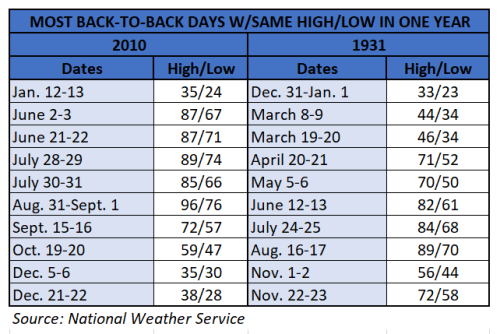 Just two degrees separated today's high (38°) and low (36°).  It was a very blustery day, with 30-40 mph wind gusts, so the wind chill in the 20s gave the air a Christmas-like feel.  Still, the day was one degree above average, making it the 16th day in a row with an above average reading.  This was also the 15th day this year with a low temperature of 36°, the most of any daily minimum.

On the first full day of winter today's high, despite mostly overcast skies, soared to 71° - eight degrees above the previous record for the date.  This was just the ninth time a 70-degree reading was reported in December (the eighth time was in 2006 - and a tenth time would happen in 2015).  And the day's low of 61° was milder than the warmest high temperature of five Decembers since 2000.  Overall, the day's mean temperature was 30 degrees above average.

Regarding the 2012 entry, how often does two degrees separate the high and low? Is this the last time it's happened? I know you mentioned ONE degree separating them is extremely rare (I think 10 or less times in 150+ years of record and the last one sometime in the 1990s) but not sure how rare TWO degrees of separation are.

Was there ever a day in which the temperature did not change at all from midnight to midnight (i.e. high and low both the same)?

There has never been a day in which there was no difference between the high and low temperature.