The day after a blizzard buried New York under a foot-and-a-half of snow, the mercury dropped to 6°, which was the sixth day in a row with a low in the single digits.  There would be eight more days with lows of ten degrees or colder this winter, which ranks as New York's seventh coldest on record.

The 0.1" of snow that accumulated today was the first measurable snowfall of the winter, a winter that would have 13.4" of snow in total, the least since the winter of 1878.

Today's high/low was a frigid 16°/8°, twenty-one degrees below average.  The high is the coldest recorded on this date, and the day's mean temperature was the coldest in December since Dec. 18, 1919, when the high/low was 11°/-1°.

For the third day in a row the high temperature was 60°.  However, today's high occurred shortly after midnight, and then the mercury fell for the rest of the day, bottoming out at 36° twenty-four hours later.  The day was also a rainy one, with 0.72" measured.

This was the third day in a row with a high of 40°, which was seasonably cold for this time of year.

In the midst of a very mild month today was an anomaly as 4.8" of snow fell during the morning.

With a high/low of 31°/18°, today was the first day of the winter completely below freezing.  There would be only seven other such days this winter (the average number is 17).

This very mild December was the mirror image of 1989's frigid December as today was the first day that was colder than average - and it was the first cold day in five weeks (since Nov. 21).

Although yesterday's 12.2" of snow wasn't a record for the date (the blizzard shared the date with New York's great 1947 snowstorm), today's 7.8" was.  The blizzard's bull's-eye was west of New York, where most towns in New Jersey were buried by more than two feet of snow (e.g., Newark measured 24.2").  This was also the 103nd, and last, day of precipitation for the year, tying 1965 as the fewest days in the years since 1950.  The average number of such days is 122. 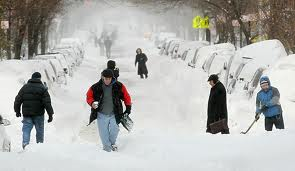 For the second year in a row it was a challenge returning to New York after visiting my mother in Pittsburgh for Christmas.  Last year's trip was impacted by the blizzard.  This year New York was lashed by a rainstorm (1.02" fell) with high winds between 6-9:00 PM that delayed my 5:30 flight to JFK until 9:30.  With a high of 57°/low of 38°, today's mean temperature was 14 degrees above average, the eighth day this month with temperatures 10 degrees+ milder than average.  This was also the 24th day this year with an inch or more of precipitation, the second most of any year, breaking a tie with 2007 and 2010 (the greatest number of days was in 1983, which had thirty). 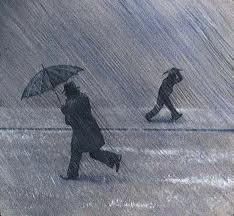 Regarding the 2011 entry, wasn't 1983 the year of 80" of precip that became suspect because of a problem with the rain gauge at Central Park? Would that affect the number of days of 1"+ precipation (i.e. maybe a day that was 1.1" was really 0.9" or something?). Just wondering....maybe just like with total inches of precip 2011 is the real "#1" in this category.