Today's high of 57° was book-ended by two days before and after with highs of 55°.  (Average high this time of the month is in the mid-40s.)

The day's very mild high of 67° occurred shortly after daybreak.  This was thirty-two degrees above the typical temperature for that time of day.  And while the temperature fell slowly throughout the day, it was still 56° at midnight.

This was the fourth day in a row with a high in the 60s.  During these days the high averaged 63°, 17 above average, and more typical of mid-October.  The average low was also milder than the typical high for this time of year (49° vs. 46°).

Today was the first day of the winter with a high temperature of 32° or colder.  The high of 32° was 14 degrees below average and was the first of thirteen freezing-or-below days this month December (the average is four).

Today's high was 71° (twenty-five degrees above average), one degree warmer than yesterday, and another record.

The City was under a blizzard warning for much of the day, as an additional six inches of snow fell on top of yesterday's eight-inch snowfall.  The high temperature struggled to reach 28° after a morning low of 23°.  Just a week into the month, this was already the snowiest December since 1960 (when 19.8" fell). 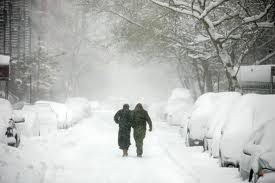