This was the sixth day in a row with a low in the teens.  And at 10° (a record), today's was the coldest reading of them all.

What became known as Pearl Harbor Day was clear and cold in New York, with a high/low of 36°/26°.  Gusty winds made it feel even colder (in the upper teens).

The 1.32" of rain that fell today (mostly between 8 AM and noon) accounted for more than half of the month's precipitation - and was nearly four times greater than November's total precipitation (0.34").  Today's high of 55° was the mildest reading of the month.

Although today was noticeably chillier than the previous three days, which had highs in the 60s and 70s, the high/low of 52°/44° made this the eighth day in a row with a mean temperature that was ten degrees or more above average.

Today's high of 75° was a whopping twenty-eight degrees above average, setting an all-time high for the month of December.  It came just three days after a high of 74°, and was the tenth consecutive day in which the high temperature was 60° or warmer. 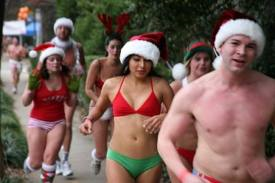 Today's high was 32°, the first daily maximum temperature of freezing or below this winter.

Today's rainfall of more than one inch brought the year's total precipitation past 70 inches - more than 20 inches above a typical year (and 24" above the average amount by 12/7).