A History of Frigid Temperatures in New York City 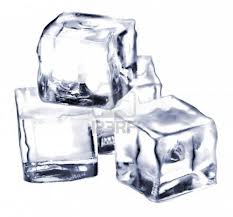 Temperatures colder than 10° above zero are infrequent in New York. Since 1970 the average number per winter has been three (in the 21st century the average has fallen to two days.)  Not surprisingly, two-thirds of Central Park's frigid readings have occurred in January.  The sweet spot is between Jan. 16-22, with the peak day being January 18, which has had readings in the single digits nine times.  The earliest date since 1970 for a single-digit reading has been Dec. 3, which occurred in 1976; the latest was on February 28, 2014. 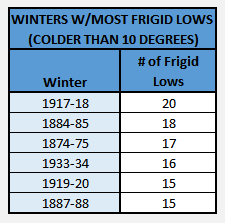 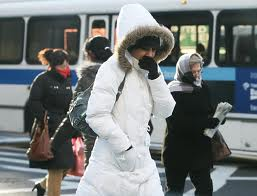 Just one day since 1970 has had a high temperature in the single digits.  It occurred during the great Arctic outbreak of January 1985.  On Jan. 21 the high reached only 9° (after an AM low of -2°).  That reading was reached shortly before midnight.  During the daytime hours the temperature hovered around 7°.  This was the coldest high temperature for New York since Feb. 15, 1943 when the high that day was just 8° (and that was the second time that winter with a high of 8°; the first was on Dec. 20).

Finally, in this century there have been six extended Arctic outbreaks of note.  Three were in consecutive years - January 2003, 2004 and 2005.  The most recent, during the winter of 2018, featured the third longest streak of highs 32° or colder on record (14 days, two days fewer than 1961's lengthiest streak and one less than a streak during the winter of 1881).

Very interesting. Where do you get the detailed historical weather reports for NYC?

I make my observations based on the data found in the monthly weather recaps provided by the National Climatic Data Center, which gathers daily conditions for every weather station in the US. Another good site is Weather Underground, but NCDC provides most everything I need. I used to subscribe to its monthly reports for New York but now the reports on their website are free (since 2012).

There was a three month period of below freezing temps in NYC probably in the early 1970's. Temperatures - day or night - never got above 32 degrees. I think it started late December and ended late March. Mounds of black frozen snow stayed on the street corners in Manhattan for weeks. Do you know when that was?

Hi Joe, your description brings to mind a number of very cold winters. Although they didn't have non-stop days of sub-freezing highs, the winters of 1970 and 1971 were quite harsh. The same can be said of the winters of 1968, 1977 and 1978. Of course, this is based on temperatures in New York City. If you lived in the suburbs you likely would have experienced more days with highs below freezing and lows that were in the single digits or sub-zero.

I make my observations from NOAA Online Weather Data (NOW Data) which, in my opinion, is so much better than Weather Underground because the website is riddled with errors and only provides data from this century. NOW Data does a much more efficient and faster job at helping the user search for what he/she wants to search for. the website is as accurate and excellent as NCDC is.

November 30, 1875 - The high/low on this day was just 14/5; this remains the coldest November day on record. What is particularly striking is that this day was significantly colder than any other cold wave in November.

December 28, 1917 to January 4, 1918 - This eight-day cold wave set seven record lows that are still standing. December 30, 1917, with a high/low of 2/-13, stands as New York City’s coldest day on record. I was curious if there were any days that stayed completely below zero; the answer is no, but this day was the closest to doing that.

Temperatures this cold are practically unheard of for a Mid-Atlantic city, and are much more common for an Arctic place like Alaska or Northern Canada. However, once every few years, there is an occasional day or two that enters the single digits. The most recent case of this happened in January 2019, which had three such days.

The period from Jan 1994 to Feb 2016 not having a subzero temperature in NYC is the longest such period in Central Park's 150+ year record, 22 years.

The coldest month ever in nyc, January 1857, colder than February 1934, and the coldest high temperature on January 10, 1859, during which the temperature remained below zero the entire day.
https://blog.nyhistory.org/a-word-about-the-weather/

Fascinating! That's why I try not to use the qualifier "ever" when reporting about extreme temperatures or precipitation. Instead, I use "on record" (Central Park records), or "since 1869". I wonder where in NYC George Hodgdsen lived and made his observations?

Looking at the grid for January 1859, it appears there are 4 columns that may be observations at 6AM, 9AM, 12 Noon, 4PM (it's a bit illegible). And if this January was colder than 1934, it's very surprising that I don't see any below-zero figures, and there appear to be nine days with highs of 45 or warmer. The article doesn't say it was colder than Feb. 1934, so perhaps when the writer said coldest on record, he was limiting it to the years Mr. Hodgdsen reported on.

I'm surprised at how "warm" the 2000-01 cold wave was. How could it maintain an average high of 30.0 and yet still have 13 days with highs below freezing?