Since 1980 March has been the peak month for strong nor'easters, but they've occurred throughout the year, even in June and July.  What follows is a review of more than two dozen that have made their mark, arranged in chronological order.  And although some of New York's big snowstorms may have been nor'easters they aren't included in this analysis.  Instead, you can read about them in my post "Snowstorms of New York City'.

March 21 - A nor'easter battered the area with heavy rain and gale force winds.  2.21" fell, a record for the date; an additional 1.04" fell the next day, ending in the early afternoon.  The 3.25" of rain that fell during this 36-hour assault was the most since January 1979.  The winds were so strong that the 50-story office tower I worked in at 800 3rd Avenue (between 49th and 50th Streets) was swaying noticeably and closed mid-afternoon.

March 28-29 - A developing nor'easter brought a mix of snow and rain during the afternoon that continued through 3/29.  1.5" of snow fell on the 28th, but forecasts had predicted substantially more.  However, the temperatures were just a bit too warm to support a snowstorm (high/low was 43/34).  Thirty-nine consecutive hours of precipitation ended at midnight on 3/29, totaling 2.60" (2.04" of it fell on the 29th).  There was only a two-degree difference between the 3/29's high/low (36/34).  Although 3.3" of snow fell during the storm, it was washed away by regular changeovers to rain.

October 31 - An intense nor'easter (made famous by Sebastian Junger's book The Perfect Storm) brought gusty 30-40 mph winds but stayed far enough off the coast that NYC received just a a trace of rain.

December 11 - A vicious nor'easter pounded NYC this Friday a.m. with 50-75 mph winds (Central Park had a 64 mph gust) and heavy rain (2.41", a record for the date).  The high winds created a storm surge that flooded New Jersey's PATH stations and pushed the East River up over parts of the FDR Drive during morning rush hour.  The winds also caused elevators to malfunction in some office towers and high rise apartment buildings. 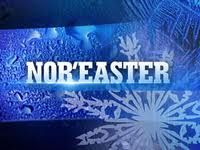 October 19 - A nor'easter dumped 4.35" of rain, forcing postponement of Game 1 of the World Series at Yankee Stadium between the Braves and Yankees.  Half of the rain came down between 2-5PM with 1.07" falling in the hour between 3-4:00.  Not surprisingly, this was a record rainfall for the date.

March 31 - A nor'easter with 30-45 mph wind gusts dumped 2.32" of rain in New York and record amounts of snow in New England on the following day (25" in Boston, 18" in Providence).  A few days earlier NYC had been warned of the potential for significant snow accumulation as well, but too much mild air moved in.

March 6 - For the past few days a monster snowstorm (which The Weather Channel labeled "The March Lion") had been forecast with 12-18" predicted at one point.  However, it was a bust as only 3.5" fell (2 inches yesterday, 1.5 inches today).  The storm developed further north than was expected, sparing the City and NJ.  Long Island's Suffolk County, however, was walloped with 10-15" of snow.  The earlier forecast created a panic and many schools and businesses in the City closed yesterday.

March 8 - An Arctic front combined with a rapidly developing nor'easter wreaked havoc during the afternoon and evening.  Accompanied by 40-50 mph winds, the temperature dropped like a rock, from 57° to 18°.  A burst of snow fell on top of a coating of ice formed when rain-soaked pavements froze.  1.5" of snow fell in NYC while many suburbs had 3-5 inches.  Besides making driving difficult, the icy surfaces made walking very challenging, especially with the howling winds.

April 15 - An intense nor'easter that struck on this Sunday dumped 7.57" of rain, the second greatest 24-hour rainfall in NYC history.  Three inches fell between noon-4PM (including 1.19" in one one-hour period); another period of torrential rain dumped an additional 1.70" between 9-11PM.  In between these two periods of torrential rain there was a period of calm, even a bit of clearing,somewhat resembling the eye of a hurricane.  An additional 0.84" fell overnight thru noon on Monday.

March 13 - On the anniversary of the March Superstorm another ferocious nor'easter dumped close to four inches of rain and was accompanied by 50-75 mph wind gusts.  The rainfall was the most ever measured in a 24-hour period in March.  Six persons were killed in the metro area by falling trees and hundreds of thousands of homes were left without power.

March 30 - The second strong nor'easter in little more than two weeks buffeted the area.  Like the previous one this storm also produced more than four inches of rain.  Beginning late on 3/28 (when 0.34" fell) it continued through this afternoon.  After 1.58" of rain yesterday, an additional 2.45" fell today (a record for the date, breaking the previous record from the nor'easter of 2001).  With today's rainfall the month's total precipitation reached 10.68", making this the wettest March on record.

October 29 - An intense nor'easter lashed the area with high winds and outrageously early snowfall.  The 2.9" of heavy, wet snow that was measured in Central Park was the most to ever fall in October (5.2" fell in Newark and over a foot buried northern NJ, parts of NY state, CT, western MA and NH).  Since the temperature never fell below freezing there was mostly just slushy accumulation on City streets.  However, the day's low of 33°, which occurred in the early afternoon, was the coldest reading in October since 1988.  Total liquid precipitation from the storm was two inches.  Remarkably, the next measurable snow wouldn't be for another twelve more weeks (4.3" on January 21, 2012).

April 22-23 - A steady light rain during the daytime hours turned heavy after dark and was whipped around by gale force winds as a powerful nor'easter made itself known.  The brunt of the storm was felt from 8:00-midnight, with conditions greatly improved by 2AM.  The 2.89" of rain that was measured in Central Park was greater than the paltry rainfall of the previous nine weeks.  Of the storm's total, 2.45" fell on the 22nd and was a record for the date.

January 31 - A ferocious rainstorm swept through the metro area overnight, with wind gusts of 45-60 mph common throughout the region.  Besides wind and rain, very mild air surged ahead of the cold front that fueled this storm, pushing the temperature up to 61° shortly before 2:30 AM.  Although the worst of the storm had moved out by 7AM, high winds continued for the rest of the day, and by evening the temperature had fallen by 25 degrees.  The 0.94" of rain that fell in Central Park was the same amount that fell during Superstorm Sandy back on Oct. 29-30 (but over considerably fewer hours).

November 26-27 - The 2.49" of rain that poured down from a nor'easter that moved in last night (when 0.51" of the storm's total fell) was more rain than what fell in the previous 11 weeks (since 9/12).  Winds gusted between 30 and 40 mph.  The high temperature of 62° occurred shortly after daybreak and fell steadily throughout the day.  This storm lashed the area on the day before Thanksgiving.

April 30 - Until this year April 30 was one of three dates that had never seen an inch of rain.  That more than ended today as nearly five inches flooded the area, with more than half of it falling after 6PM.  The 4.97" that fell was the ninth greatest daily rainfall on record.  Besides the rain it was also a very raw day with temperatures only in the 40s.

December 9 - A strong nor'easter lashed the City, beginning a few hours before daybreak and continuing thru mid-afternoon.  It produced 2.54" of rain, a record for the date; winds gusted between 30-40 mph (and 45-55 mph on Long Island).  This storm brought to mind the big nor'easter of Dec. 11, 1992 (which also produced a record amount of rain for the date).  However, today's wasn't quite as powerful or disruptive.

January 23-24 - A nor'easter brought winds that gusted between 33-47 mph throughout 1/23, but steady, wind-lashed rain didn't move in until late in the afternoon.  By midnight 1.16" had fallen - and an additional 1.18" fell the next day.  It was a cold rain, with temperatures in the mid-to-upper 30s; the high winds produced wind chills in the 20s.  This storm struck on the one-year anniversary of the blizzard that produced New York's greatest snowfall of all time (27.5").  Interestingly, the 2.34" of rain that fell from this year's storm was 0.02" more than the amount of liquid precipitation from last winter's blizzard.

October 29 - On the five-year anniversary of superstorm Sandy flooding the metro area, an intense nor'easter lashed the area with gusty winds and an all-day rain that amounted to 3.03" (and an additional 0.25" fell after midnight).  This was more rain than fell in the past 60 days, and the biggest rainstorm of the year, passing the rainstorm of 5/2 by 0.01".

March 2 - The day after March came in "like a lamb", a fierce nor'easter battered the area.  Throughout the day the City was lashed by a wind-driven mix of rain and wet snow that amounted to 2.24" (0.38" of it fell last night).  And although Manhattan was spared gale force winds (the peak gust was 34 mph), gusts of 50-70 mph were common at the three major airports as well as on Long Island, along the Jersey shore, and southern New England.  For much of the storm temperatures were in the mid-to-upper 30s and wind chills in the upper 20s.

October 26 - After moving in late last night, a nor’easter dumped 3.30" of rain today, with 2.51” falling this morning, and 0.79” after dark (and it continued falling overnight).  This rain brought an end to what had been a dry October, with less than an inch of rain through yesterday.  Today’s rainfall came very close to the record for the date, 3.40” in 1943 (also produced by a nor’easter).  The storm’s total rainfall of 3.69” made it the third biggest rainstorm of the year, behind Henri's 8.19" in August, and Ida's 7.23" at the beginning of September.

April 19 - A fast-moving nor'easter that moved in late last night was over by daybreak today.  2.09" of rain poured down, mostly between 10 PM and 3 AM.  Winds gusted to 37 mph at Central Park, with 45-65 mph gusts common on Long Island and in Connecticut.  This was the biggest rain total from a storm system since a nor'easter dumped 3.53" of rain nearly six months ago (on 10/25-26 ).

Tags: coastal storms along the US East Coast, nor'easters