Beginning early this morning, and continuing for 24 hours, a steady light snow fell and 5.4" accumulated   This was four days after a 5.8" snowfall. 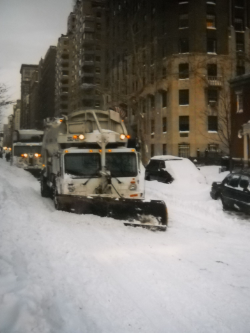 The 2.5" of snow that fell would be the winter's largest accumulation until mid-March.  Although the precipitation started as snow late in the morning, it changed to freezing rain late in the afternoon and then to rain overnight.

Although it was a record for the date, today's rainfall was a relatively modest 1.25".  Much of it fell between midnight and 4 AM, but it continued through midday.  This was also the last day of an eight-day streak with mean temperatures 10 degrees or more above average (including Jan. 5 and Jan. 6, which were 26 and 31 degrees above average, respectively).  The last time the temperature was below average was on Dec. 9.

This morning's low was 9°, a reading that held steady for 15 consecutive hours, beginning at 4 PM yesterday.

Today was the third day in a row with very cold temperatures, all with highs below 25°.  Today's high/low of 21°/8° was one degree colder than the high/low last year on this date (22°/9°).  In the years since 1960 this is just one of a few dates with a low in the single digits in consecutive years (it also happened yesterday). 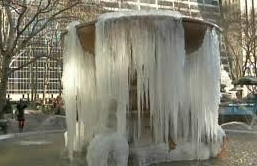 Today, with a high/low of 31°/17°, was the fourteenth day in a row with a high of 32° or colder, making this the third longest cold wave on record (behind a 16-day streak in the winter of 1961, and a 15-day streak in the winter of 1881).  Today's high was somewhat of a surprise because last week the forecast high was 40°, and even today the forecast was for a high of 33°.  The average high/low during these two weeks was 23°/13°, fifteen degrees below average.

This was the last day of an 18-day streak with above average temperatures (based on mean temperature).  It was the longest such streak since last winter, which had one of similar length during practically the same date range (12/20-1/6).  And the average high/low of the two streaks was nearly identical: 47°/37° this winter vs. 48°/37° last winter.  The mildest reading of this recent streak was 57°; the coldest was 28°, which occurred tonight as midnight approached.

You are correct. My aging eyes had overlooked a high of 31 in Dec. 1994, so that was the additional winter I was showing. Thanks for pointing this discrepancy out.