Today was the seventh day in a row with a high in the teens.  The average high/low during this streak was 17°/8°.  This streak of bitter cold was embedded in a 13-day streak with highs of 30° or colder.

With a frigid high of just 12°, and a low of 2°below zero, today was not only the coldest day of the year, but one of New York's coldest days in the second half of the century.

From an already frigid 19° just after midnight, the temperature fell all day and by midnight the official thermometer in Central Park reported a reading of 0°.  This outbreak came just five days after another Arctic plunge had produced lows in the single digits for three days running.

For the fifth year in a row the high temperature on this date was 32° or colder.  Also, 4.1" of snow fell during the morning, the biggest snowfall of the month.

A winter storm predicted for today drew in more mild air than expected, resulting in a mostly rain event (after starting as a brief period of snow that accumulated 1.3").  1.34" of precipitation fell in total, a record for the date.  (This was also the first time an inch or more of precipitation fell on this date.)  The temperature rose from 12° shortly after midnight to 47° by early afternoon, and began tumbling later on as an Arctic air mass moved in.

Snow showers during the afternoon brought the first accumulating snow of the winter, amounting to 0.4".  This was about one month later than the average date of New York's first snowfall, and the sixth latest date on record.  (All of these late dates have occurred since 1966.) 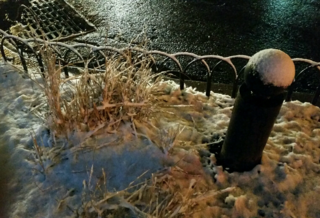 1.53" of precipitation fell during a winter storm that moved in yesterday evening, beginning as snow for a few hours (accumulating 0.8"), and then continuing as rain until mid-morning today (when 1.16" fell).  This  was more than what fell in either November (1.12") or December (1.39").  Furthermore, this storm's precipitation doubled what had fallen in the first 15 days of January, and at 3.07" in total, was more than what fell in November and December combined.