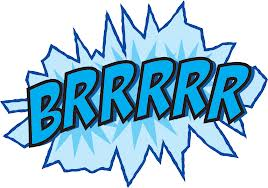 Today was the coldest day of the winter, with a high/low of 23°/6° - seventeen degrees below average.

Today was the 20th day in a row with colder than average temperatures.  The average high/low during this period was 28°/16°, eleven degrees below normal.  Two-thirds of the days since Dec. 14 had high temperatures of 32° or colder.

Today's high of 63° was the mildest reading of the month and occurred just three days after January's coldest reading (8°).

The 0.5" of snow that accumulated this morning was the first measurable snowfall of the winter, the latest first snow in twenty-five years.  It was also the only snow to fall all month.

It was a sloppy day, as an inch of snow fell in the wee hours of the morning (when the temperature was in the mid-20s), changed to freezing rain around daybreak, and then to plain rain later on.  Total precipitation for the day was 1.27", making this the sixth year in a row in which precipitation fell on this date.

An all-day deluge from a storm that hugged the coast dumped 2.10" of rain, a record for the date and the biggest January rainstorm since 1999.

Although the half-inch of snow that fell before daybreak was of the "junk" variety (i.e., largely gone in my neighborhood by the time I left for work), it was the first measurable snow in Central Park in nine weeks - since the "surprise" snowstorm of Nov. 15.  Only the winter of 2011-12 had a longer gap between a winter's first and second snowfall (12 weeks).

One week after a record-setting high of 69° (and six days after a record high of 68°), today saw quintessentially wintry conditions, as a steady light snow fell during the afternoon, amounting to 2.1" (the first snowfall of two inches or more this winter).  The temperature was in the 20s during the daytime hours but rose above freezing after 6 PM (peaking at 37° as midnight approached), changing the snow to sleet and then rain for a few hours.  This was the last measurable snowfall of the winter, the earliest date on record (one day earlier than the previous latest date, in 2002).