Until today it had been a colder than average January, with temperatures averaging three degrees below average.  But then for the rest of the month a big January thaw got underway, and temperatures averaged 15 degrees above average (high/low of 55°/39°).

3.45" of rain fell on Super Bowl Sunday, with most of it falling before 7 AM.  This is the most rain to fall on one date in the month of January.

This was by far the coldest day of the winter.  The low was 2° below zero, and the high just 9° above zero, the coldest high temperature since Feb. 15, 1943, when it was 8°.  (And it's the last time a day's high was in the single digits.)  Meanwhile, down in Washington, ceremonies for President Reagan's second inauguration were forced indoors because of the bitter cold. 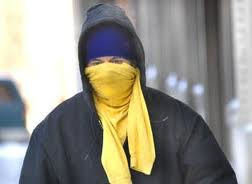 High temperatures over the past seven days ranged between 37° and 39°, which was right around the seasonal average of 38°.

A quick-moving snowstorm dumped six inches of snow this Sunday morning, a record for the date.  The flakes stopped falling by 8 AM.

Twelve weeks after the Northeast's freak pre-Halloween snowstorm on 10/29, Central Park finally had its next measurable snow as 4.3" fell during the morning.  The accumulation would have been even higher if sleet hadn't mixed in.  (Coincidentally, 4.2" fell on this date last year.)  Today's high was 29°, making this the eighth year out of the past ten in which the high was 32° or colder on 1/21.

After a week-and-a-half respite, winter returned with a vengeance as wind-driven snow and plunging temperatures snarled the City.  By midnight temperatures had fallen into the low teens (wind chill was at zero degrees) and nearly 11" of new snow was on the ground (breaking 2001's record).  The timing of the snow couldn't have been worse for commuters as it began around 9 AM and continued until 10 PM. 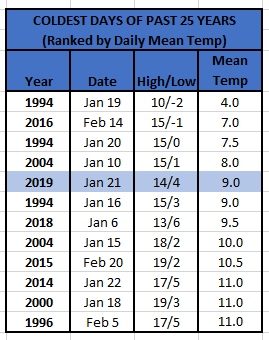 did 2012 set some kind of record for the longest gap (84 days) between a season's first and second measurable snowfall?