This was the fourth day in a row with a high of either 21° or 22°.  And three of the four days had lows in the single digits.  Even though there were colder days, this was the most sustained stretch of Arctic cold this winter.  However, there was no snowfall.

The biggest snowfall of the winter began tonight and was mostly over before daybreak the following day.  In total, 4.2" accumulated, with three inches falling tonight.  This was the smallest amount for a winter's biggest snow since the winter of 1955 when the largest accumulation was 3.9".

Between Jan. 8 and today, a period of less than three weeks, 8.19" of precipitation fell, including four days that received one inch or more.  And 0.45" of rain fell early this morning, making this the wettest January on record (until the following year).  Today also reported the mildest reading of the month, 58°, which was reached before daybreak.  This was the mildest reading in more than two months (since Nov. 17).  However, after passage of a cold front, the temperature fell sharply for the rest of the day and by midnight it was 22°.

The winter's first snowfall of an inch or more fell in the wee hours of the morning, accumulating 1.3".  This was the fifth latest date for the first such snowfall.  The daylight hours were mostly sunny, but cold, with a high/low of 31°/20°.

4.5" of snow fell during the morning, the largest accumulation of the month.  It was followed by a blast of Arctic air, which dropped the temperature from 32° to 5° by midnight.

Snow began falling heavily in the late afternoon and blizzard conditions developed after nightfall.  By midnight, close to 13 inches had piled up, and by the time the snow wound down at daybreak on the 27th, nineteen inches had piled up.  (This was just one month after a post-Christmas blizzard on 12/26-27 socked the City with 20 inches.)  Shortly after midnight I ventured outside to snap photos and found traffic mostly at a standstill on Seventh Ave. South in Greenwich Village, with taxis pointed every which way.  The quiet usually associated with a snowfall was broken by the sound of spinning tires.  This furious spinning created a pervasive odor of burning rubber. 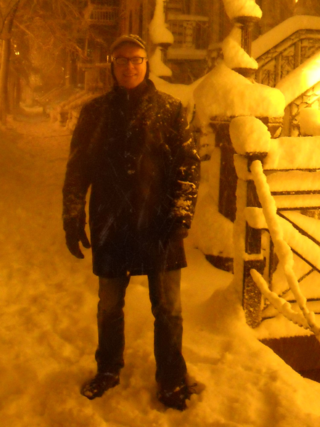 Under clear skies the high temperature struggled to reach 27°, making this the sixth day in a row with a high temperature of 32° or colder.  The last time the City experienced a cold streak of this length was six years ago.  The average high/low during these six days was 25°/15°, twelve degrees colder than average.  This cold snap followed a two-week period which had temperatures nine degrees above average.

A major snowstorm predicted for the area approached, and light snow began around daybreak.  It fell steadily through evening, but then a "dry slot" moved in for four hours.  By midnight the snow had resumed and there was 5.5" on the ground, with a lot more expected (but, as it turned out, Central Park would be on the edge of the heaviest accumulations). 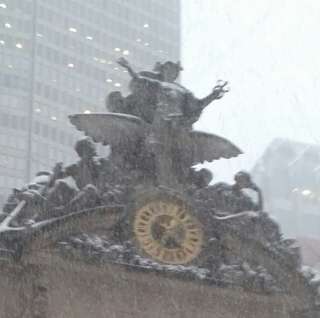