After twelve of the past thirteen day had highs of 32° or colder (average high was 26°), today's high jumped to 51°, which was the first reading of 50° or warmer in six weeks.

The low this morning was one below zero, a record for the date (that still stands).  The next day, however, would have a high of 44°, followed by seven days in a row with highs in the 40s or 50s.

Four days after a morning low of one below zero, the temperature at daybreak was 56°.  It was also a rain-soaked day, with nearly two inches falling; the 1.94" that fell was a record for the date.  After peaking this morning, the temperature slowly fell throughout the day.

This was the first of twelve days in a row in which the high temperature was 32° or colder.  This was the longest such streak during the 1970-2000 period, but it would be topped in the winter of 2001, when there was one of thirteen days.

Today was the seventh day this month with a morning low in the single digits.  It was also the sixteenth day of the past twenty to have a high temperature of 32° or colder.

Since Jan. 6 temperatures averaged nine degrees colder than normal, with an average high/low of 30°/14° - more typical of January's temperatures in Chicago.

The 6.7" of snow that fell before daybreak was a record for the date and brought the month's total snowfall to 36.0", the most ever in January.  (Just a year earlier, 36.9" of snow fell in February.)  In the past 33 days, beginning with the Christmas blizzard, an incredible 56" of snow fell.  And for the first time, New York had two snowstorms of 19" or more in one winter. 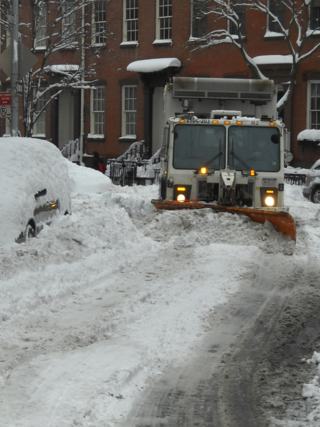 The "great" blizzard wasn't to be as just 4.3" of snow fell after midnight, bringing the storm's total to 9.8".  As a result, the National Weather Service issued an apology to the City, which had shut schools and the transit system based on a forecast of 18-24 inches (my office was also closed).  However, just 30 miles east of the City, most towns on Long Island received that amount.  The snow ended mid-morning and the day's temperatures stayed in the 20s.