Snow that began falling after 9 PM on the 27th continued thru mid-day today, accumulating ten inches in total.  The temperature was in the low 20s throughout the storm.

With a high of 33°, today was the only day in the two-week period between Jan. 23-Feb. 5 to have a high above freezing.  The average high/low during these two weeks was 25°/14°, eleven degrees below average.

Yesterday's and today's highs of 69° and 66°, respectively, were new records that are still standing.  These unseasonably mild temperatures came less than two weeks after back-to-back days with lows in the single digits.

New York was on the northern fringe of a winter storm that became known as the "Knickerbocker Snowstorm", after the roof of a movie theater by that name in Washington, DC collapsed from the weight of 28" of snow, killing 98 moviegoers.  And although NYC escaped the paralyzing amounts of snow that piled up in Virginia, DC, Maryland, and southeastern PA (6.5" fell in Central Park, the biggest snowfall of the winter), gale force winds clocked at between 35 and 50 mph howled for nearly 24 hours beginning mid-day today.  (Earlier in the month a nor'easter on 1/11 produced a peak wind gust of 54 mph).  Temperatures throughout the storm were in the 29° to 31° range, with wind chills in the low teens.

(60 years later, on Jan. 13, 1982, another DC-based disaster was tied to a winter storm when a plane crashed into the Potomac River when it couldn't gain altitude due to the weight of ice on its wings. That storm brought nearly six inches of snow to New York.)

The morning low of 25°, a seasonably cold reading, was the coldest temperature of the month, making it the mildest coldest reading on record for the month of January.

The winter's nastiest storm dropped 7.1" of snow and sleet, which was accompanied by northeasterly winds that gusted to 34 mph.  Precipitation began at daybreak and continued through early evening. 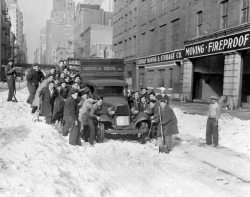 Rain in the morning (when temperatures fell from the low 40s through the 30s) changed to snow early in the afternoon, accumulating 5.8" by early morning the next day - the winter's biggest snowfall.

Today's high of 44° was the mildest reading of this brutally cold month.  The last time the temperature was this mild was on Dec. 20.  However, this respite was a brief one as another Arctic front pushed through during the afternoon, and by midnight the temperature had tumbled to 13°.

Sixteen of the past twenty-one days had high temperatures at or below freezing, averaging 11 degrees below average.  12 inches of snow fell during this three-week period.

The winter's first one-inch snowfall came in the wee hours of the morning; the daylight hours were clear and cold with a high/low of 23°/14°.  (This was also the day the space shuttle Challenger blew up shortly after lift-off at Cape Kennedy in Florida.)

The past five days were 13 degrees colder than average, with an average high/low of just 25°/12°.

Today's high temperature leapt to 55° after yesterday's frigid low of 0°.  In addition, 1.87" of rain fell, a record for the date.

In the past two weeks, eight days had high temperatures of either 38° or 39°.

Fourteen of the past fifteen days had high temperatures that were below freezing.  However, despite this cold snap just 2.6" of snow fell.

Although today and yesterday had different highs and lows (yesterday's was 18°/9°, today's was 22°/5°), they both had the same mean temperature (13.5°), which made them the coldest days of the winter.  Today was the eighth day this month with a low temperature in the single digits.  All of them occurred in the past eleven days.  This was the same number as last January, but this year's were more concentrated. 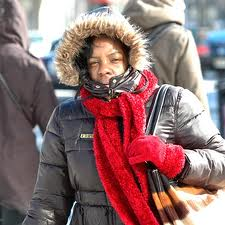 Question about the 1994 drop in temperature: Was that the biggest temperature rise from one day to the next? I do remember that month, it was quiet a ride.

Thanks as always for the blog, and Happy New year!

Wow! Totally interesting data. Thanks for the reply, and for doing the extra "homework". Really appreciate it. --Ken