The temperature at 9 AM was 6°,  just eighteen hours after the 3 PM temperature on 1/28 had reached 58° - one of the greatest temperature drops in less than 24 hours in NYC history.  Winds gusting between 20-30 mph in the morning produced sub-zero wind chills.  This incursion of Arctic air was accompanied by the only measurable snowfall of the month, a measly 0.1".  This was the fourth January in a row to have less than an inch of snowfall (the average amount back then was close to 10"). 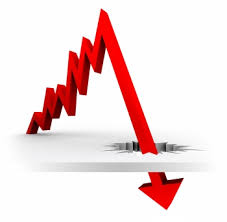 With a high/low of 51°/42°, today was the first day completely above freezing in nearly seven weeks (since Dec. 14).

Rain changed to snow around daybreak, and the 1.8" that accumulated was not only the first measurable snow of the winter (the latest date on record), but the largest accumulation as well.  (Until 2022, this was the last time an inch or more of snow fell on this date.)

Today's high/low of 23°/14° was the same as yesterday's, which is the coldest pair of identical highs/lows on record (out of nearly 350 such pairs that have occurred).

The afternoon high soared to 69°, thirty-one degrees above average, and a record for the date.

In the past four days, very cold and dry air produced 2.5" of powder/fluffy snow from just 0.04" of liquid precipitation.  Today was the eighth day this month with measurable snowfall, which was notable since only 4.7" of snow fell during the month.

With a high/low of 25°/14°, today was the coldest day of the winter.  Only nine other winters (including last winter) have had milder temperatures for their coldest day.  In the years since 1980, a winter's coldest day has had an average high/low of 20°/9° (in the winters before 1980, the average coldest reading was 17°/4°). 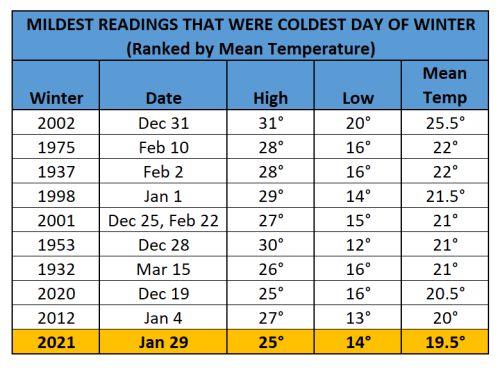 Snow that began after 8 PM last night continued thru mid-afternoon, accumulating 8.3".  The 7.3" that fell today was a record for the date, and was the first snowfall of an inch or more on 1/29 since 1973.  Visibility was less than 1/2 mile for much of the morning.

The temperature dropped sharply overnight from upper 20s to mid-teens after daybreak; winds that gusted between 25-35 mph produced wind chills of 0° to 5° above zero.  This snowstorm had the coldest temperatures since the snowstorm of Jan. 21, 2014 , when 11.5" piled up and temperatures dropped to the low teens in the final hours of the storm.  Today was the 4th consecutive day with a high of 32° or colder, the longest streak in Central Park since the winter of 2018, when there was a 14-day streak (Dec. 26-Jan. 8).

The City was spared much more snow as it was on the western edge of an intense nor'easter that brought blizzard conditions  and 15"-30" of snow to Long Island and southeastern New England (the Jersey shore also had very high accumulations, in the 15"-21" range). The 0.2" of snow that fell on the morning of 1/28 wasn't associated with the nor'easter, it was attributed to the Arctic front that passed through on that day.