Ten of the past eleven days had highs of 32° or colder.  The average high/low during this time was 25°/13°  Yesterday had the coldest reading, -4° (the decade's only sub-zero reading).  And Jan. 2 had eight inches of snow (2.3" of snow accumulated from two other snowfalls in late December). The five inches of snow that began falling after 9 AM was the biggest snowfall of a winter that had only 8.1" of snow in total.  Ironically, this was a record accumulation for the date.

Today's high/low of 40°/30° made this the first day since Dec. 17 with an above average mean temperature, a span of nearly three weeks.

For the eighth day in a row precipitation fell, amounting to 2.20" in total.

Today's high of 72° tied Jan. 26, 1950 for the warmest reading ever recorded in January.  This was 33 degrees warmer than normal, and more typical of mid-May.  As an added bonus, it happened on a Saturday. 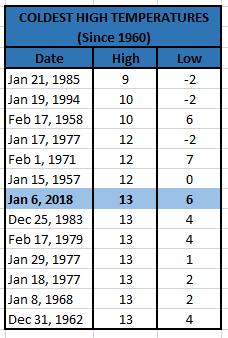 Today was the last day of an 18-day streak with above average temperatures in Central Park, the lengthiest in three years, since the record 34-day streak of Dec. 1, 2015 thru Jan. 3, 2016.  During these 18 days the high/low averaged 48°/37°, which was eight degrees above the average of 40°/29°.  The coldest temperature during the streak was 31°, which was reported tonight shortly before midnight.

2021 was the first time since 2007, and only the eighth time overall, with no reading of 32° or colder in the first six days of January.