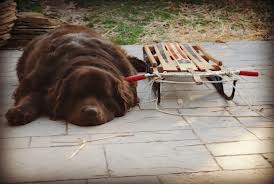 Cold temperatures and snow seem to go hand-in-hand but it's not always the case.  Every now and then (about once every four years) we experience an extended period of below average temperatures with little snow to show for it - torture for snow bunnies.  For example, the winter of 2014 had a stretch of 31 days between Feb. 25 and March 27 in which temperatures were 6.6 degrees colder than average, but just 0.3" of snow fell.  What made this even more striking was the fact that it followed a record-setting 30-day period from Jan. 20 and Feb. 18 in which 42.1" of snow fell (it was a relief, however, for New York's snow removal budget).

Probably the most notable cold and snow-free stretch of days was the bitter cold December of 1989.  Temperatures that month were 11 degrees below average but just a little more than an inch of snow fell.  And the winters of 1963 and 1968 each had two extended periods of very cold weather with little snow to speak of.  The chart below lists the thirteen least snowy periods since 1960 during periods of unseasonably cold weather, ranked by degrees below average.