This was the fifth day this week with a high in the 60s.  But after today's high of 60°, it would be eight more weeks before the next reading above 60° occurred.  And nearly 40" of snow would fall during this 8-week period.

Today, with a high/low of 26°/4°, was the ninth day of the past ten with a sub-freezing high temperature (and seven days had lows in the single digits or colder).  The average high/low during these ten days was 23°/7°, seventeen degrees below average.

With a high of 26°, this was the tenth day in a row with a high of 32° or colder.  The average high/low during this streak was 25°/10°, thirteen degrees below average.  Five of the days had lows in the single digits.

The first day of January and February had the same high/low - 47°/35°.  And neither day had any precipitation.

The morning low of 50° was more typical of late April.  Combined with an afternoon high of 62°, the day's mean temperature (the average of high/low) was 24 degrees milder than average.

Today's high of 67° was the warmest reading of the month and a record for the date, breaking the record set just last year (the month's coldest reading would be near the end of the month).  And like last year on this date, today's mean temperature was 24 degrees above average.

Only three degrees separated the day's high and low, 37°/34°.  There was a brief shower shortly before dawn and the rest of the day was overcast.

A monster snowstorm that moved in last night (two inches fell), buried the City today, and largely exited by daybreak the following day.  In total, 17.4” of snow was measured, with 14.8” of it piling up today.  The rate of snowfall was greatest from mid-morning thru mid-afternoon.  The temperature rose from 22° just after midnight to 34° in the early evening, when the snow mixed with freezing rain and drizzle, which put a stop to further significant accumulation.  15”-24” accumulations were common throughout the region.  Besides the snow, high winds were also an issue, gusting between 30-40 mph in Central Park.

With this snowstorm, the winter became New York’s twelfth with two or more snowfalls of ten inches or more (the first one this winter was on Dec. 16-17, when 10.5” fell).  This was New York’s biggest snowfall in five years (when New York experienced its biggest snowfall of all-time), and tied for fifteenth greatest accumulation on record (with Feb. 3-4, 1961). 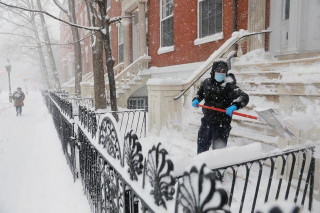 Hi Rob. I notice we have a good chance to have highs in the teens, 20's, 30's, 40's and 50's consecutively over the current 5 day period. Has there ever been a similar streak of high temperatures moving up at such an orderly pace?

Hi Ken, I noticed that as well. (We'll see if it actually happens.) And although I don't think I've written about this happening before, I'm sure it has.

Hi Again Rob. The 2/1/57 Snowstorm was at least partially responsible for a plane crashing into Riker's Island after taking off from LaGuardia, resulting in 23 fatalities. I was just a kid then, but I do remember it, being a snow buff already. It also happened to be my Dad's 40th Birthday, and we had several relatives at the house and they were all talking about it when the news broke.

The snowstorm at the beginning of February 2021 is perhaps the longest snowstorm I can remember, lasting around 36-42 hours. Have you ever done an analysis on the longest New York snowstorms? I recall reading about a storm on February 4-7, 1920, that lasted around 72 hours (3 full days).

On Twitter, a professor at Hofstra tweeted that last week's 36 consecutive hours of snow was the lengthiest streak of its kind in Central Park in the 1995-2021 period.