Today's seasonably cold high of 37° was the only day between Jan. 23 and Feb. 7 with an above-freezing high temperature.  With the exception of today, the average high/low during this extended period of frigid weather was 26°/12°.

The biggest snowfall of the winter, 3.6", began shortly after midnight and continued thru mid-afternoon.  The temperature fell throughout the day, from 28° to 10° just before midnight.

The morning of low of 7° was the coldest reading of the winter.

The morning low of -2° was the first below zero reading in Central Park since February 1943.  It came at the tail end of a record-setting sixteen-day streak of days with high temperatures below freezing that began on Jan. 19.

Rain that started yesterday evening continued thru early evening today, coming down heavily between 9 AM-5 PM.  The 2.98" that fell today (3.19" when yesterday's rainfall is included) was a record for the date, and the second highest amount for any day in February.  The precipitation began as a cold rain, but by the time it ended the temperature had risen into the upper 50s.

Light snow fell throughout the day and accumulated 4.3".  This was the third snowfall of four-inches+ so far this winter.  And one more would follow in a few days. Between Jan. 6 and today temperatures were ten degrees above average.  No snow fell during this four-week period.

Like the winter of 1959, this morning's low of 7° was the coldest reading of the winter.

Today was the 28th day in a row with colder than average temperatures.  During this four-week period temperatures were 10 degrees below normal.  20 of the days had highs of 32° or colder, there were eight days with lows in the single digits, and 17.3" of snow fell.

Today's high of 56° would be the mildest reading of the month (the month's coldest temperature would occur at the end of the month).  And fears that today's Super Bowl game in northern New Jersey would be played in cold and/or snowy conditions were allayed as the game-time temperature was in the upper 40s.  Tomorrow's weather, however, would be very different as winter returned with a vengeance. 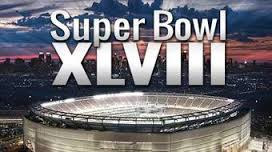 A nasty winter storm brought snow, sleet and freezing rain for much of the daytime hours, and then Arctic air blew through during the evening, dropping the temperature into the mid-teens by midnight (with wind chills around zero degrees).  Precipitation began as rain shortly before midnight on the 1st and ended as snow during the afternoon today, with a total accumulation of 5.3".  A considerable amount of sleet and freezing rain hampered the morning commute.  This and three other snowfalls in the past ten days brought 19.7" of snow.

On Groundhog Day 1976 I remember we had a snow day because of blizzard-like conditions in Westchester County in the early morning hours. It then got really cold after that.

Yes, there was a drastic drop in temperature after an Arctic front moved through, going from 45 degrees at 1AM to 10 degrees by 10AM. Rain changed to snow, but only one inch fell in NYC (2.4" in Newark).

That's the funny thing about averages, they're often the product of extremes that give you a number that's not actually reflective of reality. For instance, with a month's average temperature, how many days actually had that reading?

Rob -- I am surprised you did not include February 2, 1976 among your posts for this date. I remember waking up at 5 a.m. (I was living in Throgs Neck at the time) and hearing rain pounding down on my awning. I had an indoor-outdoor thermometer and it was 40 degrees . . . and falling fast! I could actually see the mercury falling right before my eyes!

Within less than an hour, I had whiteout conditions with temperatures in the 20s and by 7 a.m. , the snow had ended (I received 2") , the Sun was coming out and my thermometer read 10-degrees. It was the flash freeze to end or flash freezes.

And I remember hearing Bob Harris on the "Rambling with Gambling" show on WOR/710 Radio at that hour, state that the storm responsible was rocketing past Cape Cod with a central pressure of 28.50" -- "As low as a mature hurricane in the middle of the summertime!"

Keep up the great work!