Between Feb. 10 and today, temperatures were 10 degrees below average (average high/low was 32°/14°), but there was no measurable snow.

1.1" of snow fell before a changeover to rain took place.  This was the month's second, and last, day of precipitation.  The last time there were so few days of measurable precipitation in a month was back in October 1963.

For the seventh day in a row the mean temperature was at least 12 degrees above average.  The high/low during these days was 58°/45°, seventeen degrees milder than normal.  This streak came in the midst of seventeen consecutive days of above-average temperatures (Feb. 14-March 2).

The high temperature was 40° for the fourth day in a row.

Today's high of 66° broke the record high set last year (63°).  Then a cold front moved through during the evening and the temperature fell to 38° just before midnight.  The cold was ushered in by winds that gusted to near 40 mph.

Today's springlike high of 69° was a record for the date and three degrees warmer than two days ago when another record high was set.

Five days after a blizzard buried the City under 19.8" of snow, a cold, hard rain fell from mid-morning until late afternoon, with 1.49" measured.  This was the same amount of liquid precipitation measured on 2/17 (when 16.3" of the blizzard's snow piled up).

Six inches of slushy snow fell during the morning and continued thru early afternoon. This amount was also a record for the date and was the biggest snowfall of the winter - the largest accumulation since New York's biggest snowstorm of all time two years ago (since relegated to second place).

You know it's been a harsh winter when a high/low of 43°/32° in late February is cause for celebration.  Coming after a nine-day stretch with temperatures that were 17 degrees below average (26°/10°), and three snowfalls that amounted to 8.2", today felt like spring.  I took advantage of the sunny and mild conditions and walked to Hudson River Park to catch a glimpse of the ice floating by on the river.  The day's high would be the mildest of the month, making it the coolest maximum reading for February since 1978 (when the mildest reading was just 41°).  Although today's high was seasonable for the date, it was the mildest reading of February, and the mildest since Jan. 5 (when the high was 49°). 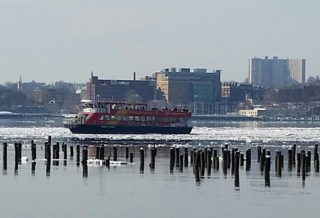 today in 2020, the humidity bottomed out at 16%. when was the last time the humidity was this low in February?

The last time was in 2004, when there were a few hours one afternoon in late February when the humidity dropped to 16%.

Hi Ken, although four in a row is the longest such streak I've found for high temperatures (there have been six of them), there was a five-day streak with the same low, which occurred From Oct. 8-12, 1970 (61 degrees).