From Jan. 12 through today 10.62" of precipitation was measured (0.41" of rain fell today).  Nineteen days had measurable precipitation, ten of which had snow (with a total accumulation of 8.2").  This would be the wettest winter on record until the winter of 1978-79.

For the third day in a row the City was lashed by snow, sleet, freezing rain and rain (although the temperature got no higher than 33°).  Like the previous two days, between five and six inches of snow and ice accumulated, bringing the storm's three-day total to 17 inches (and an additional half inch would fall in the wee hours of 2/7).  1.40" of liquid precipitation fell today, bringing the three-day total in Central Park to 4.41".

Just two degrees separated today's high and low (35°/33°), something that occurs just once every two or three years.

Less than three weeks after 13.6" of snow buried the City, an even bigger snowstorm struck.  Snow began falling before dawn and by midnight 15.5" had piled up in Central Park.  An additional 2.2" fell the next morning.  The snow, drifted by winds gusting between 30-40 mph, fell heaviest between 7 PM-1 AM, when it fell at a rate of more than an inch per hour.  This was the first winter in seventeen years to have two snowstorms of one foot or more. 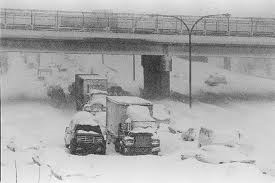 Snow began in the afternoon and by the time it ended early the next day 3.9" had fallen (2.5" of it fell today).  This was the largest accumulation so far this winter (but would be easily topped in a less than a week by a crippling snowstorm).

Including this morning's snowfall of 2.3", ten inches of snow fell since Feb. 2.

Arctic air moved in early in the day, dropping the temperature from 46° to 10° by midnight (the high the day before was 56°).  1.9" of snow fell during the morning.

Today's high of 68° broke the previous record by 10 degrees.

It was a very frustrating day for New York snow lovers as a crippling snowstorm that dumped 20"-30" in Pittsburgh, DC, Baltimore and Philly stopped at our doorstep, bringing just a few flurries to Central Park.  (Staten Island, however, picked up 3"-5".)  The culprit was a strong high pressure system over New England that blocked the storm from moving up the coast.  (Despite escaping this storm, Feb. 2010 would become NYC's snowiest month on record, with 36.9".) 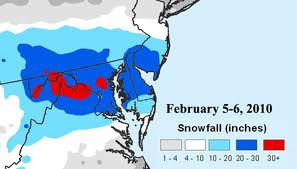 Hi Rob. Have you ever done a study on NYC's weather on Superbowl Sunday.? We were talking about that today. I remember one in the early 2000's (?) when NY had several inches of snow during the game. And going way back to the mid 70's one year it was bitterly cold, low teens. And of course in 2014, the year it was actually in the NY Metro area, it was unseasonably mild, followed by a snowstorm the next day. Just a suggestion.

Hi Ken, I haven't published a post focused on New York's weather on Super Bowl Sunday (yet), but a number of those Sundays appear in my daily highlights posts. The snowfall you're thinking of was probably in 2000, when 1.5" fell. Surprisingly, that's the most that's fallen on Super Bowl Sunday, but that amount should be easily surpassed this year. 1972's Super Bowl was likely the one you referred to that was played on a bitterly cold day; the high/low was 15/5, the coldest day of that winter in NYC. Finally, the snow you mentioned in 2014 that fell the day after the Super Bowl, was the inspiration for my post about biggest snowfalls that happened the day after mild temperatures ("Mild One Day, Snow the Next").