The day after the mildest reading of the month (57°), the temperature at daybreak was 21°.  This was the first of eleven days in a row in which there were no highs milder than 40°; four days in a row would see lows in the teens (coldest reading was 10° on 3/19).  The average high/low during this Arctic outbreak was 32°/22° (fifteen degrees colder than average).

Today and yesterday was the first time since Dec. 16-17 to have back-to-back days with lows above 32°.

For the fourth day in a row the high was 39° (eight degrees below average); however, every day had a different low temperature.  Today was the only day of the four that had sunny skies.

On a rainy day (mid-morning thru mid-afternoon), just two degrees separated the high (42°) and low (40°), something that occurs just once every two or three years.

Befitting March's reputation for changeable weather, this morning's low of 15° came less than 48 hours after a high of 76°.  These were also the month's extremes in temperature.

The half-inch of snow that fell today was the most significant accumulation on this date in the years since 1960.  However, it was quickly washed away by rain as the temperature rose into the low 50s.

This was the nineteenth day in a row with above-average readings.  During these days, the average high/low was 55°/39°, nearly 10 degrees above average.  Not only was it a mild period, but dry, as just 0.29" of rain fell.

Today's high of 74° was a record for the date, a jump of twenty-seven degrees from the morning low.  It was also the mildest reading of the month.

For the second day in a row the area basked in record-breaking warmth, with today's high two degrees warmer than yesterday's (although today had more clouds than yesterday).  Today's high/low of 79°/63° was 31 degrees above average, and was comparable to temperatures in mid-June.

For the first time since 1934 more than an inch of snow fell on this date, as 2.1" accumulated between 8 AM and noon.  This was a day after the temperature reached 61° in the late afternoon, similar to what happened on Feb. 9, when 9.4" of snow fell the day after the high was 62°. 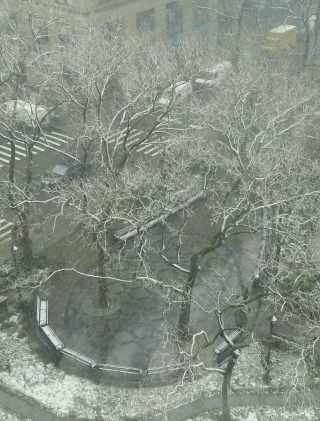 in 2016, how could today be warmer than yesterday despite having more clouds?

The first ten days of March 2019 had no highs in the fifties, the first time this has happened in March since 2001, and only the seventh time since 1960.