A bit more snow (three inches) fell today from yesterday's blizzard, but what stood out today was the extreme cold (even by mid-winter standards), as the high/low was just 12°/6° - the second coldest day ever experienced in March (the high/low on March 5, 1872 was 10°/3°).  With gusty winds still prevalent, wind chills were below zero.  This was the fourth March in the 1872-1888 period to have two days with lows in the single digits; since then it's happened in only one other year (1916).

Today was the eleventh day in a row with a mean temperature that was 10 degrees or more below average.  (This would be the second coldest March of the 20th century.)

For the first time since Feb. 5, no snow was on the ground in Central Park.

One last wintry day as sleet and slow lashed the area from 5 PM into the wee hours of 3/14, accumulating 4.6" (much of it today).  After a morning low of 23° the day's high of 33° was reached just before midnight.

The sun finally reappeared after nine straight days of gloomy, drizzly and foggy conditions.  During these days 3.72" of rain fell and there was little diurnal variation in temperature as lows were around 40° and highs in the mid-40s.

A winter storm brought snow in the morning, freezing rain in the afternoon, and plain rain during the evening.  1.4" of snow/ice accumulated and 2.31" of liquid was measured, most of which fell after 4 PM.  The temperature rose from the mid-20s at daybreak to the mid-30s by 10 PM.  This was the sixth day in a row with temperatures that were 10 degrees or more colder than average.  The average high/low during these days was 33°/18°, fourteen degrees below average.

Winds shifted to the southwest, lifting the temperature from 43° to 85°, which was 37 degrees above average.  This was the earliest date for an 80-degree reading (breaking the previous record from 1945 by a week).

The great March Superstorm (also referred to as "Storm of the Century") paralyzed the Eastern third of the nation and dumped 10.2" of snow on New York.  The heavy snow changed to sleet and rain later in the afternoon, reducing the predicted snow total by four to six inches.  The sound of the sleet lashing against the windows of my apartment, propelled by 40-60 mph wind gusts, was deafening.  All told, 2.37" of liquid precipitation was measured.  For a first-person account of the storm click here.  (Photo taken near corner of 7th Ave. South and Bleecker St.) 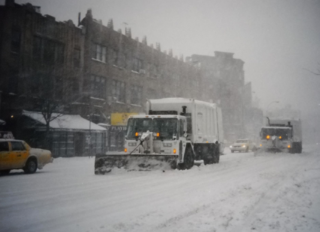 The past twelve days were seven degrees colder than average.

On the anniversary of the March Superstorm, another ferocious nor'easter dumped close to four inches of rain and was accompanied by 50-75 mph wind gusts.  The rainfall was the most in a 24-hour period in March since 1875.  Six persons were killed in the metro area by falling trees and hundreds of thousands of homes were left without power. 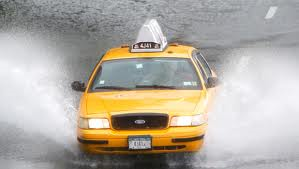 Today's high of 74° was twenty-six degrees above average and the warmest reading since Oct. 10 of last year.  This was the third 70-degree day in the past week.  At midnight the temperature was still at 67°.

Today was the fifth day in a row with temperatures in the 50s.  Although hardly an eye-popping occurrence (the average high during these days was just three degrees above average), it was the longest such streak in nearly four months (Nov. 20-24).

Between 3 PM yesterday and 7 AM this morning, the temperature plunged from 56° to 18°.  This surge of Arctic cold was accompanied by wind gusts of 35-50 mph, which produced below-zero wind chills.  Under clear skies today's afternoon temperature struggled to reach the mid-20s.