A late season snowfall of six inches was the largest accumulation of the winter, besting the snowfall of Dec. 14 by half an inch.

After a record high of 76° was reached at 3:00 PM (a record that still stands), the temperature dropped like a rock and was half that reading by midnight.

A paltry 0.1" of snow that fell in the early evening brought the winter's total snowfall to 60.4", making this the snowiest winter on record, breaking a tie with the winter of 1873.  This would stay the snowiest winter for 25 years (it's now ranked fourth).  This dusting of snow came about as Arctic air moved through the region; the temperature plummeted from 48° in mid-afternoon to 15° by midnight.  Strong winds after dark that gusted to 44 mph produced sub-zero wind chills.

Today was the seventh day in a row with highs in the 60s.  The average high during this week was 65°, at a time of the year when highs are typically in the upper 40s.

After 3.8" of snow fell yesterday afternoon and evening, an additional 7.8" fell today (thru late afternoon).  Temperatures stayed in the mid-20s all day.  In the past four days 18.3" of snow fell from two storms (6.7" fell on 3/16-17) and temperatures were 15 degrees below average.  Until four days ago just eight inches of snow had fallen all winter. 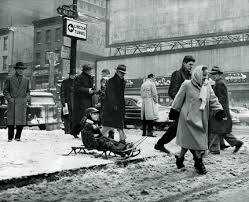 The morning low was an extraordinarily cold 8° above zero, 27 degrees below average - the latest date on record for a single-digit reading in New York.  This came eight days after a high of 72°.

The biggest snowfall of the winter fell today, a sloppy 6.2".  This tripled the winter's relatively snow-free snow total to 9.4".  Just two degrees separated the day's high and low (33°/31°).

How about the gorgeous pre-NYC private school Spring Break Friday of 2010, where temperatures climbed well over 70 degrees? The still barren trees in the park combined with many people wearing shorts/T-shirts created a "What's Wrong with this Picture?" scenario. The next day, Saturday, was also warm and beautiful; I believe the mercury reached 76. However, a nasty storm got us on Sunday night, making travel by plane to the Breakers in Palm Beach unpleasant - the flight was very turbulent.