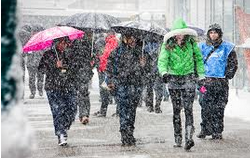 The morning low of 9° was the coldest reading all winter.  This was similar to last year when the only reading in the single digits was in March (7° on 3/7).

With today's four-inch snowfall (an additional inch fell the next day), New York's snowfall for the winter passed fifty inches, the most since the winter of 1977-78 (when 50.7" was measured).  Today's snow was the fifth that accumulated four inches or more this winter.

With today's snowfall of 4.6", Central Park set a new seasonal snowfall record, with 66.3" measured.  This surpassed the winter of 1947-48, when 63.2" fell (and included, at the time, New York's largest snowfall of all-time).  Even more distance would be created between this and the previous record by an additional ten inches of snow in the next four weeks.

After today's 0.52" of precipitation (including 1.3" of snow), the rest of the month would receive only 0.28" more, making this the driest March on record.

8.3" of snow fell from a quick-moving storm that moved in last night (when 1.8" fell), making it the largest accumulation of the winter - and the most in three years.  12-15" fell out on Long Island.  This was the last measurable snowfall of the winter.

The day after March came in like a lamb, a fierce nor'easter battered the area.  Throughout the day, the City was lashed by a wind-driven mix of rain and wet snow that amounted to 2.24" (0.38" of it fell last night).  And although Manhattan was spared gale force winds (peak gusts were around 35 mph), gusts of 50-70 mph were common at New York's three major airports, on Long Island, the Jersey shore, and southern New England.  Temperatures were mostly in the mid-to-upper 30s (with wind chills in the upper 20s).